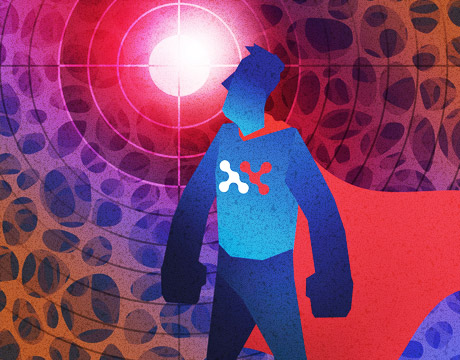 The Nanotechnology Startup Challenge in Cancer is a chance for ideas to find a home—and hopefully a chance to ultimately save lives.

“The mission for what we do is to identify breakthrough innovations and help them reach commercial potential,” explains Jonathan Lui, managing director of The Center for Advancing Innovation. “We found there is this subset of these technologies that haven’t been commercialized but have a lot of taxpayer dollars put into research and are very good inventions. A competition can possibly help them move forward. There are many projects that have potential but they just fall by the wayside. This is a way to bring them back into play.”

The Challenge, which had to partner with the National Institute of Health (NIH), was an opportunity to sift through patented nanotechnology cancer inventions in the National Cancer Institute patent portfolios and get teams to compete in order to carry them to fruition, he says. This is really like a startup accelerator model to get these technologies out into the market, he adds.

The requirements for a team involved what certain participants brought to the table. “We require them to have someone with a business background, a legal background, and a scientific background, all important skills to help in moving forward,” says Lui, who has a bachelor’s degree in operations research and industrial engineering from Cornell University. Teams picked one of the available technologies and developed their best form of a business model for it.

“Every technology in the program will have five to ten teams developing their best business practices,” he says. “There are different stages: evaluation stages to weed some teams out; an elevator pitch; executive summary; they will have to deliver a full business plan; ten-page pitch deck; twenty-minute live pitch session and financial models. We’re trying to select the best team and best model for every invention put in the program.”

There were five finalists and five winners in the most recent competition, with the latter receiving a cash prize of $2,000, likely to be used for costs ahead, such as possible incorporation.

Looking back, one of the standout technologies in the competition to Lui was a novel lipid base nanoparticle for releasing “on demand” for cancer treatment, utilizing infrared light and allowing for a very local release to avoid certain negative effects. “But there were others that were also strong,” he says. “It just shows you what might be at your fingertips.”

Another payment, beyond the cash prize, are the lessons learned.

“This can be a training ground that they can use to get future work off the ground, understanding that you may have to execute how to make it viable financially, not just have a product that’s interesting.” Lui says presently some who were involved in the contest are progressing at different rates but there is reason for optimism.

“The hope is one day we’ll look back and see some of this work having changed lives,” he says. “Sometimes something just needs a jumpstart. Hopefully this has done that.”

For Further Discussion
The hope is one day we’ll look back and see some of this work having changed livesJonathan Lui, The Center for Advancing Innovation Article
Harnessing Offshore Wind Energy Using Floating Wind Turbine Farms
In the United States, planning for the development of ways to harness offshore wind is just beginning, and engineers modeling these turbines and floating arrays are answering the unique engineering challenges—known and unknown.