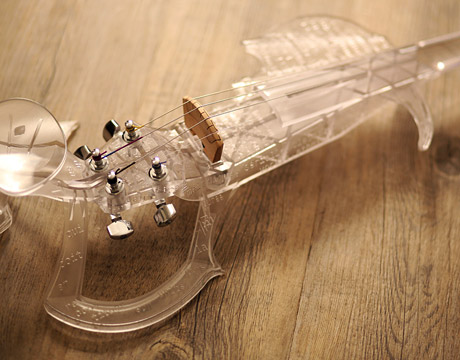 Music to His Printer

Laurent Bernadac has two passions: engineering and playing the violin. Both require a sharp concentration and are an art to be respected. However, for most of his life, he assumed he could not combine the two.

But now he has, with his 3D-printed violin.

“The 3Dvarius was born in 2012,” he says. “I was a student in a mechanical engineering university called INSA and based in Toulouse. I'm also a professional violinist—I began the violin at four. I decided to create an electric violin that was corresponding to my playing style.”

But at first, he didn’t know to design it. “I searched about it and based my design on the planes of a real Stradivarius,” says Bernadac, who previously worked for a hydropower firm in charge of restoring a hydropower factory. “And after three prototypes, and many different 3D models, I reached the final model, which is fully playable.” The third prototype utilized a stereolithography 3D printer.

To design this lattice, he had to check the mechanical solidity of the violin’s body. He accomplished this with RDM6 software, “which computes the deformation of the piece against the stress of the chords,” he says.

A classical violinist can play it because all of what he deems the mandatory shapes—neck, chinrest and bridge—are present,” he says. “But, as a conventional electric violin, it has no soundboard,” he says. “The sound goes directly from the chords to the bridge without losing its power. But electric violin is not really like a classical violin. It's like electric and acoustic guitars. You have to play it differently according to the sound and the effect you want to obtain.”

Bernadac says 3D printing objects are used by musical instrument producers to create only prototypes, but he believes it will eventually lead to creating final instruments. “And maybe totally new instruments with totally new sounds,” he adds.

He says electric violins can’t be used like you would a conventional violin and easily insert it into a symphony orchestra. “But I think that all actual instruments will be 3D printable in a few years,” he says, “And maybe we will be able to listen to fully 3D printed musical bands.”

Learn more about the latest trends in 3D printing at AM3D Conference and Expo.

For Further Discussion
I think that all actual instruments will be 3D printable in a few years. And maybe we will be able to listen to fully 3D printed musical bands.Laurent Bernadac, 3Dvarius