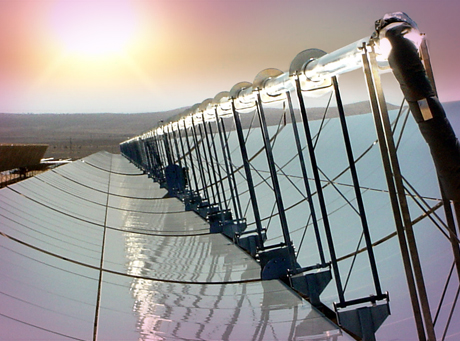 Most of it is standard, insulated stainless steel, transporting high-temperature heat transfer fluid (HTF) from the solar field, where it is heated to thermodynamic power cycle components to produce electricity. Constantly circulated and monitored, HTF flow is critical for the plant’s efficiency.

What is unusual about piping HTF in a CSP plant is the connections to the heat collection elements (HCEs) mounted at the focal line of the parabolic troughs, known as solar collector assemblies (SCAs). These connections must accommodate both sun-tracking movements and expansion and contraction caused by fluid with a temperature that can reach as high as 400 °C.

There are three locations where HTF connections can be made to SCAs:

There is no single accepted hardware solution or design approach, as several technologies are used in many different trough and support designs.

The biggest piping challenge in HTF loops (out and back through long rows of SCAs) has been the “quality” of the connections: maintainability, reliability, and lifetime. Better hardware and new configurations are providing improved connection options, and as systems trend towards larger dimensions, new applications of traditional connectors are helping as well.

Hot fluid leaks not only reduce system performance by changing the fluid pressure, but they increase the risk of insulation fires or auto-ignition. With risk of fire, high operation costs, and the necessity for large numbers of replacement parts, some pursued other options while improvements to flex hoses were developed.

Ball joint assemblies, which have graphite seals and both rotation and angular deflection capabilities, were chosen by those with flex hose issues. Many suppliers and spare parts were available, and seal maintenance after thousands of hours of use resulted in lower maintenance costs.

For almost a decade, ball joints were the best technology available, but during that time, development on improved flexible hoses continued, resulting in hoses with multiple layers and thermally insulated stainless steel braiding.

This resulted in improved reliability, making flexible hoses once again a viable option. Some plants used single or double implementations of flexible hoses in one area and ball joint assemblies in others.

The industry is trending toward longer troughs with larger HCEs and reduced space between SCAs. According to one trough designer, as trough sizes increase, the heavier, larger diameter ball joints they require are more difficult to seal and make larger collectors harder to control, which may limit their use.

Beyond a certain collector size, long, flexible hoses bend under their own weight, becoming difficult to control. Also, more linear expansion along the line of the collector increases the possibility for twisting, which is unacceptable for a hose in flexure.

This has resulted in next-generation flexible hose connection systems that now combine corrugated flex hoses with swivel joints that can absorb both the rotations of the giant troughs and axial motions.

According to one manufacturer, compared to ball joint assemblies, these new “rotation flex hose” systems impart less force into HCE tubes, have fewer seal points, and require less maintenance. They can also be installed in double “u-shaped” configurations between SCAs. Currently being used on several platforms, flexible hoses used in combination with rotary joints are viewed as viable options for long-term operation.

Expansion joint assemblies are the latest technology being applied and evaluated as interconnects. Different configurations containing one or more metallic bellows mounted on fixed pipes help dampen vibrations and absorb dimensional changes caused by thermal or mechanical movements such as axial extension and compression, lateral movements, or angular rotation.

As with most developing fields, the technologies used in parabolic CSP are evolving over time. Manufacturers will be providing the best solutions at the best prices with hopes of providing high volumes of connectors to the expanding amount of commercial projects in this area.

There is no single accepted hardware solution or design approach, as several technologies are used in many different trough and support designs.