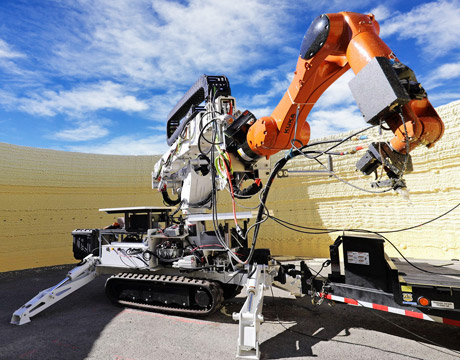 Thomas Edison became famous for a number of inventions and innovations that changed how America worked and lived.

But he wasn’t perfect. Among other failures, his efforts at changing homebuilding fell short when his system to build poured-concrete houses proved too expensive.

More than 100 years later, researchers are trying to succeed where Edison did not through new adaptions of 3D printing.

Working from a mobile, tracked platform, one of the newest 3D printing systems promises to enlarge and extend the technology to the construction of buildings in isolated areas and harsh conditions. Still in development at the Massachusetts Institute of Technology, the robotic 3D printing system has successfully built the walls of a 50-foot-diameter, 12-foot dome in less than 14 hours. And its developers say it can use a wide range of materials to “print,” including concrete, but also the soil found on site that the machine itself can excavate, and taper walls and other elements of a structure.

Working from the Mediated Matter Group within MIT’s Media Lab, Steven Keating says the overall vision is to “use biology as inspiration and as a design tool” in an effort to move the construction industry toward new designs and methods. MMG concentrates on nature-inspired design. The work emphasizes designing and building structures without parts, using the 3D printing platform to build structure and façade and then moving to elements such as interior beams or windows.

Keating, who earned his doctorate in mechanical engineering from MIT, notes little has changed in construction methods through the years. “A building is built of assembled parts that are screwed or nailed together. Parts are sourced in a factory,” he says.

The alternative “is to build more like a biological system,” he says. The robotic 3D platform, known as the Digital Construction Platform, should mimic biology by viewing the building as an organism digitally designed and built with a system that seamlessly connects and supports the whole.

The equipment consists of a large robotic hydraulic arm fitted to a converted truck with a smaller robotic arm at the end, powered by solar photovoltaic panels. The combination gives plenty of reach as well as dexterity in applying material.

“Think of the small arm as a finger,” says Keating. “It allows for compensation and more complex moves.”

That is a big difference from other large-scale 3D printers being developed. Most utilize gantry cranes or rails to move and a fixed structure to support the nozzle. That limits the size of the object they are building to the physical constraints of the support system. Keating says the mobile, free-moving platform can build something of any size and, because of its small footprint, can easily fit into most construction sites.

Key to the system is its ability to vary the density of the material as it is being applied, allowing it to taper walls or build an overhang, all to the standards of building codes, Keating claims. The system can also mix materials, such as soil for construction of a compressed earth structure. The arms also can be fitted with other tools to support functions such as excavation or milling.

“We wanted this to be not just a 3D printer,” says Keating, whose work on the system led the development as his doctoral thesis. “We wanted to do milling, to get a much higher resolution than what we actually needed.”

For the test, Keating’s team used the digital platform to print polyurethane foam blocks commonly used as formwork concrete construction. “We wanted to have a system that we could use right away,” says Keating, noting that there is still much research needed to bring the system to its full potential. “We wanted to replicate a process that is easily integrated into a construction site. So we 3D-printed formwork.”

The hollow foam blocks are filled with concrete to form walls, and interior and exterior elements can be attached to them. Keating says the material cured within 30 seconds and the entire test was complete in 14 hours, showing that the system can be adapted to existing projects and meet standards of existing building codes. Additionally, he says the test showed the system can successfully print the dome, a double curvature structure with more complexity than a standard building. Because the device can print while it is being driven, “It potentially has an unlimited horizontal build space,” says Keating.

Keating says the team brought in local contractors to ensure they were using existing construction-ready materials and standards were being kept. “We brought in contractors to do hydro-pressure test,” he notes. “It was important for us to put out full specifications,” a key to attracting funding. Its initial success has already attracted firms such as Google and Autodesk, which are contributing money and space for further development.

That could include making the platform even “smarter” and fully self-sustainable. Keating says sensors could make measurements to determine the best places to put in windows, based on the site specific location of the sun. Ground radar could determine the best place to put in a foundation, and the printer can form walls of varying thickness for insulation based on direction: southern exposure may require a thinner wall than a northern exposure. Walls could be tapered based on load-bearing needs.

The platform’s ability to work with a variety of different material makes it attractive for use in the developing world, isolated areas where costs of traditional building materials are prohibitive, or disaster relief where people need shelter. “It can excavate soil and with some fiber make a compressed earth structure,” he says, and its size allows it work in tight spaces.

“There’s all sorts of novel possibilities, more than any other technique,” Keating says. For future space exploration, it has the potential to work on Mars using soil and ice. Back on earth, “What if you put seed into a soil mix for a compressed earth building? You could have a green wall.”

How far away the system is for commercial application is to be determined. Keating says the next challenges are to find enough funding to perform large-scale research on larger buildings. “Size and scale will take a long time,” he says.

For Further Discussion
We wanted to replicate a process that is easily integrated into a construction site.Steven Keating, MIT Media Lab