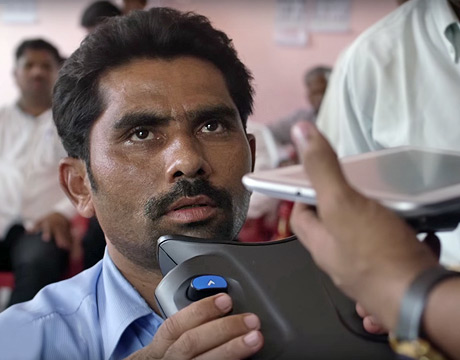 We often take the gift of sight for granted until there’s a problem. And for many of those eye problems, there are easy treatments: optometrists, eyeglasses, contact lenses.

In many developing countries, and even parts of the U.S., access is major problem. One company is coming up with a solution. EyeNetra in Somerville, MA, has created mobile devices for eye tests and care that can go to the patients, where they are, instead of the other way around.

“The kind of start-up costs you have with an eye care facility can be incredibly difficult,” says Vitor Pamplona, co-founder and CEO of EyeNetra. “Even just having the machines can be highly expensive. [For people] in developing countries and rural areas, it can be very difficult to find a facility nearby that can take care of them. For many places, if they only could have the equipment be affordable and mobile, they could do it. That’s where this system comes in to try and take care of this issue.”

The company uses three main devices, all small and portable enough to be taken anywhere, along with a phone, he says. The first device, the auto-lensometer, takes a picture through the lens, gathering information through eye interaction, which is then put into a cell phone. The device is designed for single vision, progressive lenses, and bifocals. The device curvature also allows the lens to be in the correct position at all times, says Pamplona.

“It’s looking inside like a regular display,” Pamplona says. “You’re looking through two lenses and see the screen of the cell phone play a game and the result is there.” The refractor is similar to a binocular, he says, because you want two eyes to be in the same state while measuring.

The third device is the phoropter. Set up to check refraction for lenses, it’s a standalone that doesn’t need electronics. And, according to the EyeNetra website, it is light enough to be held by the patient during testing.

The system also has record-keeping. “We have the software on the back end so, with the servers, we can keep the data for their patient and it’s secure and integrated,” he says.

In addition to parts of the U.S., Pamplona says orders have come from 72 countries, including India, Indonesia, and Malaysia.

“The full system costs $3,000 while regularly it could be around $75,000,” says Pamplona. This makes it easier for a medical professional to not only stay in business in a rural setting but possibly charge less to those who are impoverished as it is.

“We want to get people back to full performance,” he says. “It’s about the ability to perform, to go into a workplace and be able to take care of your family. There is an emotional aspect to not seeing well, to not having the same level of opportunity. You give someone lenses and now it makes it a little more fair. Everyone deserves that.” Eric Butterman is an independent writer.

For many places, if they only could have the equipment be affordable and mobile they could do it.Vitor Pamplona, co-founder and CEO of EyeNetra