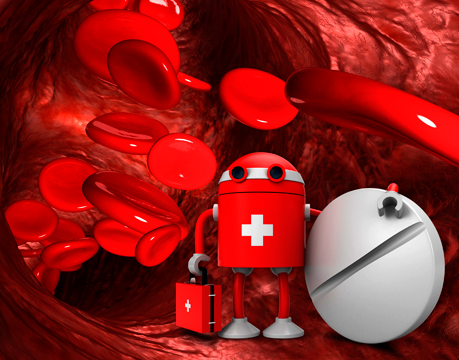 Mini Robots for Medical Use

Metin Sitti, Carnegie Mellon mechanical engineering professor, has long had a fascination with miniature robots. Ever since his days of watching the film Fantastic Voyage—a story involving shrinking people to get them inside a body—he’s always thought small. He’s happy to say he’s seeing more of his dreams become realities in miniature robotics and is even more excited about the future.

“We understand model scale structures and materials much better than in the past,” he says. “We can now build robots that can manipulate scales: nanoparticles, DNA. Basically we can use materials and devices like microscopes. Manipulation where we can assemble modulations can help us understand mechanics and behavior in scale.”

One area of strides has been in understanding how living movements can improve our daily lives. At his company nanoGriptech, analysis of a gecko’s sticky properties due to foot-hairs may lead to commercial adhesive improvements.

The company website explains: “Although the forces acting on one individual set are small in magnitude, the cumulative adhesive effect if most hairs were simultaneously in contact with a substrate would create very strong macroscale adhesive and friction forces. Additionally, gecko's feet have the amazing ability to resist contamination, allowing for thousands of adhesive cycles with minor performance deterioration.” Or the company’s water runner robot, which mimics a lizard’s ability to avoid water drag, in a way a watercraft may not be able to.

“Many of the answers are from observing what’s already out there,” says Sitti. “When you look at what it [a gecko] can do, you realize how amazing it is.”

Huge strides have been made in the surgical arena as well. What was once just for Hollywood is now giving those in medicine new capabilities. “Now you can get to tough places like the brain, in the veins, the spinal cord, and inside the eye,” Sitti says. “We can get to really small areas and do diagnostics. Treatments like biopsies or surgical work are now happening.” In fact, Sitti showed his own version of a biopsy robot to the World Science Festival in June. The size of a pill, the idea is for medical community to control the movement of it inside the body to have more awareness for possible diagnosis.

The full future he believes could have the working tandem of a mini device telling you something is not right in your body, disease detection, then surgery. The ultimate level that he sees in treatment one day could be even killing cancer cells.

What’s vital to Sitti is that research simply continues. “We’re just starting to see what’s possible,” he says. “Some of the focus will be on better products. And some will save lives. But we need to keep analyzing.”

In other words, some of the most fantastic voyages have yet to be taken.

For Further Discussion
Now you can get to tough places like the brain, in the veins, the spinal cord and inside the eye.Prof. Metin Sitti, Carnegie Mellon