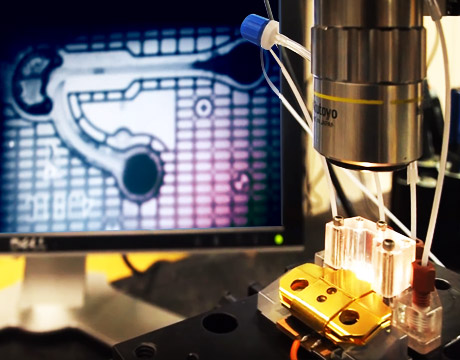 With concussions continuing to dominate the sports media landscape, anything that can help to shed light on the impact of trauma to the brain is going to garner interest.

Megan Valentine, associate professor of mechanical engineering at the University of California, Santa Barbara, and an associate director of the California NanoSystems Institute at the school, is part of a team employing a microhammer in an attempt to unlock more of the brain’s mysteries when it comes to the effects of impact.

What they find could affect everyone from athletes to accident victims.

The Power of a Little Hammer

“The microhammer is just what it sounds like: a microscale machine that can hit cells one at a time,” Valentine explains. “The microhammer is built from silicon using similar fabrication techniques as are used to make semiconductor microelectronics chips, and is magnetically actuated to strike each cell. The device is built onto a microfluidic chip that allows us to flow cells into the hammer strike zone, and then collect them afterwards for further analysis, including studies that assess the physical, chemical, and genetic changes in the cells due to impact. By leveraging cell-sorting technologies, we can strike and collect cells in a high-throughput manner.”

“However, we were never able to achieve the high force magnitudes or short pulse durations required to mimic traumatic brain injuries (TBI) with these approaches,” she says. “The lack of tools to study TBI at the cellular level has stymied research and limited our understanding of this disease, which impacts soldiers, athletes, and accident victims.”

The microhammer allows them to provide forces equal to what the brain cells go through with TBI, Valentine says, adding that this allows for assessment of the threshold levels that trigger damage and repair.

“Our method will allow us to study the role of force and impact on large numbers of individual cells with extremely high precision, and will allow us to track the cell-level changes over time,” she says. “No other technology has this capability and we are excited to see where this project leads.”

Valentine marvels at how this type of project forces participants, from engineers to medical professionals, to find a common language in order to move forward in the work.

“This is a terrific opportunity and we have had a lot of success through these brainstorming sessions,” she says. “And we have found creative solutions that no one of us would have been able to accomplish working alone.”

Still, there is a good amount of work to be done in the next steps.

“We are currently studying how force impacts affect neural stem cells, which hold promise as therapeutic agents after injury,” Valentine says. “We will continue this work and also plan to extend these studies to include not only single cells, but small tissue fragments, to allow us to assess how cell-cell interactions change after impact.”

For Further Discussion
Our method will allow us to study the role of force and impact on large numbers of individual cells with extremely high precision, and will allow us to track the cell-level changes over time. Prof. Megan Valentine, University of California, Santa Barbara