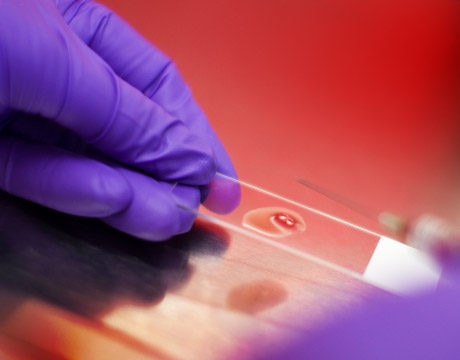 Sickle cell disease (SCD) is a hereditary disorder that affects more than 13 million people around the world. Sufferers of SCD carry a mutated form of hemoglobin that changes their red blood cells into stiff, sickle-shaped cells that slow down the flow of blood, sometimes piling up and blocking blood vessels, resulting in “vaso-occlusion events” that can cause severe pain, organ damage, and tissue death.

For many other diseases, molecular biomarkers are useful as predictive indicators and can guide intervention and treatment. However, no reliable molecular markers exist for SCD. Fortunately, a team of researchers at the University of Minnesota’s Living Devices Laboratory has discovered a biophysical marker that holds great promise for helping to determine the severity of sickle cell disease in patients, as well as developing new treatment methods.

David K. Wood, assistant professor of biomedical engineering at the University of Minnesota, and collaborator John Higgins, MD at Massachusetts General Hospital in Boston, developed a microfluidic device that can characterize the dynamics of vaso-occlusion by measuring a biophysical parameter that quantifies the rate of change of the resistance to flow. This can also indicate disease severity and possibly be used to reduce the frequency of vaso-occlusive crises.

“The major challenge of this research was to develop a system that could measure the complex rheological properties of sickle blood as it passes through small blood vessels with decreasing oxygen levels,” says Wood.

To measure blood flow, a high-speed camera captured high frame rate video sequences of flowing blood in real time. Cells in each video frame were identified computationally based on morphologic criteria. Cell locations in subsequent frames were linked to form trajectories using heuristics and machine learning techniques. The researchers defined the velocity at each point in time as the median cell velocity calculated over a 32-frame video captured at higher than 200 frames per second. Using the velocities computed from video tracking and the applied pressures, the effective viscosity was calculated assuming Stokes flow through a rectangular channel.

“A major innovation in this work is the building of microchips that actually show uswhat’sgoing on inside the human body,” says Wood.“With these devices, blood flowsjust like it does in the human body and we can reproduce the same kind of complications in the chipsthat people with sickle cell disease experience.”

As oxygen concentration in the blood is reduced, blood velocity remains constant until a critical concentration of oxygen is reached. Once the oxygen concentration drops below this threshold, the velocity decreases significantly, and at a lower oxygen threshold, the blood fully occludes the microchannel. These oxygen thresholds indicate where rheological changes can be expected to begin in the vasculature and where occlusions are most likely to occur. The group also measured the rate of change in viscosity during an in vitro vaso-occlusive event and found that these measurements correlated very well with overall patient disease severity.

“Just by measuring a sickle cell patient’s blood in our device, we can tell you how they are doingclinicallyand whether they are at risk for complications,” says Wood. “The correlation of blood rheology with patient clinical course is completely new. We’re not measuring individual molecules. We’re actually measuring the fluid mechanical properties of the blood, and we can use those as biomarkers.”

Wood’s research findings could be groundbreaking for developing more effective therapeutics for SCD that shift the viscosity-oxygen relationship to significantly reduce the likelihood of occlusion. The oxygen thresholds Wood has identified could also serve as biomarkers for identifying clinical severity, thereby stratifying patient groups and prioritizing experimental treatments.

The idea of using micro devices to model human physiology is an exciting, rapidly growing field with huge potential for treating a wide range of health conditions.

“For the first time, we are starting to truly understandsickle cell disease,” says Wood. “We are directly measuring the changes in blood flow that occur in the microcirculation, and we are beginning to understand under what conditions patients will be at risk. Based on our biomarker results, one big application is in diagnosis and clinical monitoring. Even moreexciting is that we could use this device in drug development. No assay exists that can predict the efficacy of potential therapies, andthe result is that no broadly effective therapies exist. Hopefully, using our devices, we can shorten the pipeline and help bring some new therapies to market.”