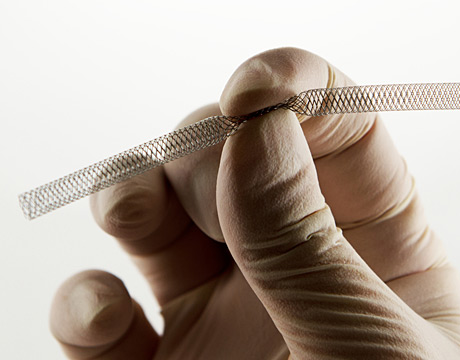 Metal That Remembers Its Shape

Most mechanical engineers don’t know much about nitinol, even though this intriguing nickel-titanium alloy was discovered in 1959 at the Naval Ordnance Laboratory in White Oak, MD. The research team made the discovery while searching for materials that could be used in tools for dismantling explosive mines.

Now, more than 50 years later, nitinol is the material of choice for select applications in the medical device and aerospace industries.

Nitinol is best known for two unique properties that broaden its appeal as a manufacturing material: shape memory and superelasticity. Shape memory is the ability of a part made from nitinol to undergo deformation at one temperature and then return to its original shape, undamaged, when heated above its "transformation temperature.” Superelasticity occurs within a few degrees just above the transformation temperature, at which point nitinol exhibits extreme elasticity, up to 30 times that of ordinary metal.

Above the transformation temperature, nitinol becomes superelastic. This is caused by martensite that forms in areas of high stress, even though the temperature is in the austenite range. When the stress is released, these martensite zones return to an austenite structure.

Nitinol has a high fatigue strength. Above its transformation temperature, it can handle up to an eight percent strain and still return to its original shape. Other attractive physical properties are thermal and electrical conductivity, biocompatibility, corrosion resistance, and kink resistance.

In order to have the shape-memory function, the part must be shape set. The part is held in a mold under pressure while it is heat-treated at 500 degrees Celsius and then fast-cooled. Then, if the piece is later twisted or deformed below its transformation temperature, it will return to its remembered shape after it reaches the transformation temperature during reheating.

Nitinol also has excellent corrosion resistance, the result of a passive titanium oxide layer that protects the base material from corrosion and nickel release. “In fact,” writes Confluent Medical Technologies, a medical device manufacturer in Fremont, CA, “many researchers report that nitinol is more corrosion-resistant than stainless steel. Surface preparation is also critical for good biocompatibility and corrosion performance.”

“Bear in mind that nitinol is expensive to make, buy, and engineer, so to be commercially successful, these costs must be small relative to the price of the final product,” points out Craig Bonsignore, vice president of applied technology for Confluent. “This is true for many medical products, where nitinol enables minimally invasive procedures that would otherwise require more costly and/or risky surgery.”

The unique combination of shape memory, superelasticity, and biocompatibility makes nitinol an ideal material for medical and dental applications. Products include orthodontic arch wire, filters, and bone anchors. The superelastic qualities of nitinol especially benefit stents, mesh-like devices that structurally reinforce blood vessels. Nitinol stents (or heart valves) can be compressed into shapes that fit inside a catheter. When the catheter is positioned at the correct location within a blood vessel, the stent is released and returns to its predetermined shape, holding open the wall of the blood vessel.

“The aerospace industry is quite invested in shape memory applications, most notably in newer commercial jet engines that can morph in shape to optimize for noise and fuel efficiency at different stages of flight,” says Bonsignore. Nitinol is also a key component in robotically controlled instruments, flight control panels, aircraft landing gear, and thermal actuated controls.

Bonsignore cautions that, although nitinol has some very attractive characteristics, using it comes with significant costs. “Don't use nitinol if you don't have to, or if the application can't afford it,” he advises. “We spend a surprising amount of time trying to talk customers out of using the material.”

Although industrious engineers can make good progress with some material samples purchased online, simple forming tools, and an air furnace, Bonsignore recommends “engaging a manufacturer experienced with the material to avoid common pitfalls and make progress quickly. Many engineers do not appreciate the importance of thermal processing and surface processing to the mechanical and fatigue characteristics of the material, so working with an experienced manufacturer can have a significant influence on performance outcomes.”

Manufacturing Blog: How to Become an Agent of Change