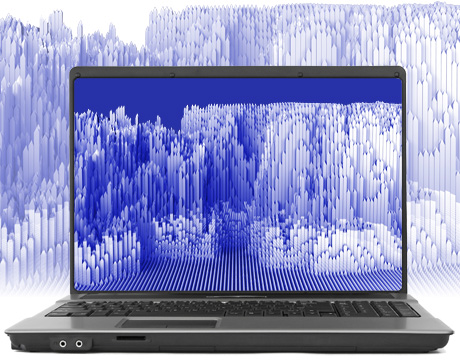 Although a number of computational approaches exist for solving engineering problems, the meshless modeling method is gaining traction among scientists and engineers. Other techniques such as finite difference/volume, finite element, and boundary element have been typically used to tackle complex engineering problems that often require extensive meshing; however, meshless methods can be just as accurate and are faster, simpler, and require far less data storage.

"It hasn't been too long ago that the idea of numerically solving complex partial differential equations (PDEs) without the need of a mesh was essentially deemed impossible, except where analytical methods could be used on simplified problems," says Darrell W. Pepper, professor of mechanical engineering and director of the Nevada Center for Advanced Computational Methods at the University of Nevada-Las Vegas. "However, over the past decade, meshless methods—being able to solve PDEs using node points within a problem domain without the need for nodal connectivity—began to show up in the area of solid mechanics. These quickly grew into applications involving heat transfer and more recently into fluid dynamics and related transport areas."

Meshless methods are uniquely simple, yet provide solution accuracies for certain classes of equations that rival those of finite elements and boundary elements, without requiring the need for mesh connectivity. Meshless also requires no domain or surface discretization or numerical integration.

"The popularity of the meshless approach results from the ease with which a problem geometry can be established, without the burden of constructing complex grids, and the simplistic solution technique utilizing basic geometric concepts, such as radial basis functions," says Pepper.

"Alternatively, a meshless method is not restricted to dimensional limitations," Pepper continues. "An infinite domain can be modeled (depending on the number of nodes) and run on a PC. The accuracy achieved, with even a limited number of nodes in a meshless method, compares closely to solutions obtained using massively refined grids. Having the versatility of the ubiquitous finite element method and its use of unstructured meshes (elements), the meshless method is becoming a quick, accurate, and viable alternative to these more popular, conventional numerical approaches."

Efforts are now underway to develop localized meshless techniques that are exceptionally fast, easy to employ, and can be used in multiphysics applications.

"Recent work has included modeling indoor air pollution, including terrorist threats, subsequently resulting in a real-time response system that can automatically activate preventive measures," says Pepper. "Another application is in bioengineering, especially in modeling aortic blood flow, distribution of air and particulates within the lungs, effects of heat transfer, and structural prosthetics. The method is also now being used to model wind fields for wind turbine siting—compared to the previous method of utilizing hp-adaptive finite element techniques to resolve irregular terrain based on sparse meteorological data." Article
Safety Standards Enable Elevators to Reach New Heights
The A17 safety code for elevators, escalators, and dumbwaiters turns 100 years old this year. Here’s a look back at some of that history, including its role in the success of the Empire State Building.