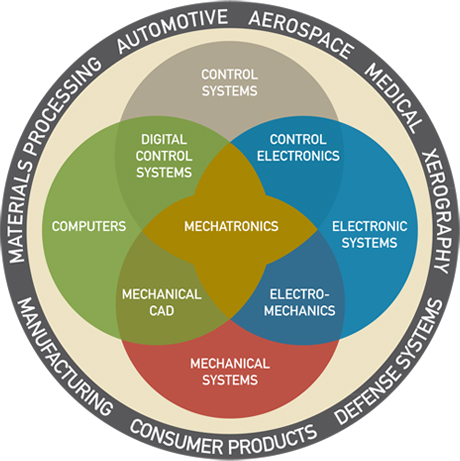 Many in the field have adapted Kevin Craig's definition of mechatronics: where mechanical, electronic, control, and software engineering all meet.

Mechatronics and the Role of Engineers

Mechatronics can be seen everywhere today. Engineers have mechatronics journals and can read mechatronics papers in journals that cover other fields, while a multitude of diverse companies are embracing its principles.

The term was coined over 40 years ago, when engineer Tetsuro Mori combined the words "mechanical" and "electronic" to describe the electronic control systems that Yaskawa Electric Corp. was building for mechanical factory equipment.

Mechatronics are all around us, from computer hard drives and robotic assembly systems to washing machines, coffee makers, and medical devices. Electronics that control mechanical systems account for much of the value of the average automobile, managing everything from stability control and antilock brakes to climate control and memory-adjust seats.

"Mechatronics" means many things to many people, but when pressed, many engineers reference a drawing shown by Kevin Craig, perhaps the nation's foremost evangelist of mechatronic design. It consists of four overlapping circles: mechanical systems, electronic systems, control systems, and computers.

"Mechatronics represents more than mechanical and electronics," according to Craig, a professor of mechanical engineering who left Rensselaer Polytechnic Institute to start a mechatronics program at Marquette University.

According to Michelle Boucher, an analyst for the Aberdeen Group, a Boston-based technology think tank, the best performers among the surveyed companies have changed the way they worked. More importantly, though, they do not schedule meetings based on time—every week, or twice monthly—but on key events in the project timeline.

So instead of wasting time in a meeting when nothing is happening, key players gather when it's time to fit the pieces together. Design and project collaboration software are also important. These applications help engineers visualize how systems work and are easy to mark up with questions and comments. "If you're an electrical engineer, you don't necessarily have easy access to CAD data, so this helps you see how the device is supposed to work," Boucher said.

But the question remains: Which engineers lead? According to Peter Schmidt, a senior research engineer at Rockwell Automation's Advanced Technology Group who teaches part-time with Craig at Marquette, "We're all engineers and we're doing engineering, period. Rockwell Automation has long hired electrical and control engineers to design its machine control and factory automation systems. Many of the company's engineers say they have been doing systems integration design and modeling (in short, mechatronics) for 20 years.

It's that multidisciplinary approach from concept through delivery that separates mechatronics from old-style control engineering at Rockwell. President Terry Precht calls it a virtual factory, combining design, manufacturing, and depot repair services. While some mechatronics teams like to run simulations, Precht prefers to use the prototype approach. "You can answer certain questions from an actual model that you can't get answered in a soft model," he said.

"Our mechanical and electrical engineers are always working very closely together on these things," Precht said. "When we build systems with complex moving parts, mechanical engineers write the control software since they understand how the devices should operate. We have three graduates that went through Doctor Dave's mechatronics course, and it was just obvious from the start how well they can work across a broad spectrum of projects compared with engineers who were classically trained."

"Doctor Dave" is David Alciatore, a professor of mechanical engineering who literally wrote the book on mechatronics, Introduction to Mechatronics and Measurement Systems, with co-author and professor emeritus Michael Histand. The first edition came out in 1999, and the book is now in its fourth edition.

In the future, though, the issue may be decided by how colleges train the next generation of mechanical engineers. Right now, most schools teach controls, basic electronics, and programming as part of the mechanical engineering curriculum.

For example, at Colorado State University in Pueblo, in addition to the course work, the engineering program also focuses on teaching students to work on teams, an essential for the multifunctional world of industrial design.

According to Craig, classical mechanical engineering has become a commodity skill. His goal at Marquette is to integrate courses so that electrical, control, and mechanical engineers learn how different disciplines use the same core knowledge to achieve different results. "We have to show how we can integrate electronics and controls into modern mechanical systems," he says.

Manufacturing companies in her community are telling her the same thing. They want students trained to integrate electronics, controls, computers, and moving parts. For them, this is not just where engineering is going. It is where engineering has arrived.