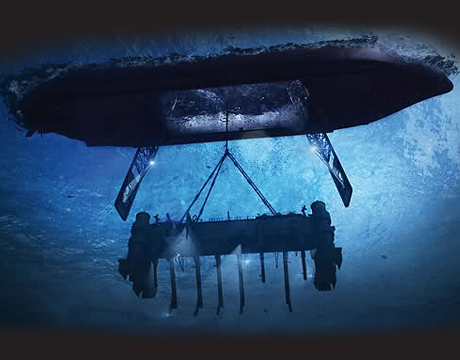 If the sea never gives up the secrets of the deep, the Central Intelligence Agency (CIA) is considered to be even pricklier. But 44 years after what may have been the Cold War's boldest, most audacious mission, new details have emerged about an incredible intelligence operation that depended on an engineering marvel. The Glomar Explorer, a custom-built spy ship fitted with a series of mechanical systems one more impressive than the next, in 1968 sailed to a remote spot in the central Pacific Ocean to recover a sunken Soviet submarine, the K-129, fitted with atomic missiles from three miles below the surface.

Speculation has followed Project Azorian through the years—the CIA did not even reveal the mission's name until 2010, when it released declassified information and documents. The Glomar Explorer's details were well-known before that; ASME in 2006 designated the ship as a historical mechanical engineering landmark. A new book, "The CIA's Greatest Covert Operation," by David H. Sharp, provides a first-hand account of how the mission and Glomar Explorer were developed.

Sharp, the CIA's head of systems recovery on Glomar, details the backroom dealings of the project and sets the tone for what was a nail-biting operation performed under close surveillance by Soviet ships that failed to detect the lift. For engineers, he puts personalities behind the names and faces of the Glomar's designers, describing in detail the challenges of designing and manufacturing cutting-edge mechanical systems under a veil of secrecy and before the advent of today's computer power. His first-hand account of its operation on the high seas relives the crew's tense apprehension as they attempted to lift a 2,000-ton submarine.

"No one had ever tried to design an at-sea docking system for such massive bodies," writes Sharp. "To have gotten it right on the first try, without the benefit of today's CAD/CAM capabilities, is simply incredible."

To accomplish the task, the CIA approached Howard Hughes, whose company, Hughes Tool Company, provided legitimacy for the cover of exploratory ocean mining at the wreck site. Global Marine Development Inc. designed the ship and the mechanical systems, building off of its work with the National Science Foundation in designing the Explorer's predecessor, Glomar Challenger, used in deep-sea drilling for scientific studies of the Earth's crust.

To raise such a heavy object in 17,000 feet of water, Global Marine enlisted a number of firms to help design a set of systems that ASME, in its citation, says included major innovations and advancements in mechanical engineering. They include: 1. A large center well opening in the ship's hull and a means of sealing it off so that the submarine could be examined in dry conditions.

4. A "claw" designed to grab and lift the submarine with mechanically articulated fingers that used surface-supplied sea water as a hydraulic fluid.

5. A motion-compensated and gimbaled work platform system that effectively isolated the suspended load from the roll, pitch, and heave motions of the ship. 6. A "docking leg" systemthat supported the weight and controlled the motion of the "claw" and load during the transition from dynamic open water conditions to the shelter of the ship's center well.

Sharp writes that the most difficult hydrodynamic analyses of the ship's systems were of the docking system, "...the most complex and frustrating. The problem we were trying to solve was how best to capture a large body—swinging at the end of a string of pipe about 110 feet below the ship—so it could be raised, under control, into the well of the ship." The task was complicated by the roll and pitch of the ship, with motions largely independent of those of the claw below, with or without the submarine in its grasp, he notes.

Analyses were performed and numbers crunched without computers; Sharp reminds that processing power was limited and the first PC did not make its debut until 1982. Designers referred to the issue as the three-body dynamics problem, with the bodies being the surface ship, pipe string and claw. Sharp says designers put more confidence in model testing because applicable equations were generally nonlinear and "couldn't be handled easily by closed form solutions or deterministic equations."

Sharp credits Jacques Hadler, Global Marine's head of hydrodynamics, with working through scale models using a combination of Reynolds numbers and Froude numbers to solve the three-body problem. Sharp says the analysis "gave us a pretty good idea of the magnitudes of relative motions to be expected between the docking legs and the [claw], but it didn't do a very good job of predicting which relative motions would be dominant." Design met reality during operations, says Sharp, adding that the analyses did not prepare the crew "intellectually or emotionally" for the physical shock and vibration imparted to the Glomar Explorer from impacts between the submarine and the docking legs. He vividly describes the reaction of the crew to the strains of the system and on the ship during operation.

Ultimately, the system's claw succeeded in gripping the submarine, but about two-thirds of the hull broke off some 9,000 feet from the surface when a number of the claw's tines failed. Most of the intelligence haul that the CIA was expecting to recover fell back to sea floor with the broken hull of the submarine.

The Glomar Explorer did bring back the forward section of the hull, which included the bodies of six Soviet submariners who were later formally buried at sea. The CIA still has not released intelligence details that were recovered, or the extent of Project Azorian's cost overruns, thought to be about $500 million in 1974 dollars.

"No one had ever tried to design an at-sea docking system for such massive bodies," writes Sharp. "To have gotten it right on the first try, without the benefit of today's CAD/CAM capabilities, is simply incredible."

The CIA was set to send Glomar Explorer on a second mission to attempt to recover the K-129's broken hull but the mission was scrapped as the U.S. government attempted to better relations with the Soviet Union. Glomar Explorer was eventually mothballed by the U.S. Navy. In 1997 it was leased by the Navy to Global Marine Drilling, which refitted it for deepwater drilling at a cost of $180 million. Its mechanical systems that made it so special were removed. Today it is owned by TransOcean Inc.

No one had ever tried to design an at-sea docking system for such massive bodies. To have gotten it right on the first try, without the benefit of today's CAD/CAM capabilities, is simply incredible.David H. Sharp, author, The CIA's Greatest Covert Operation Video
Video: Transportation Cleans Up
Automakers are making good on their plans to produce and sell more electric vehicles as emissions are targeted to fight climate change. Other modes of transportation are starting to catch up. Shipping and railroads are exploring other options.