Material Does the Impossible: Grows Under Pressure

Material Does the Impossible: Grows Under Pressure 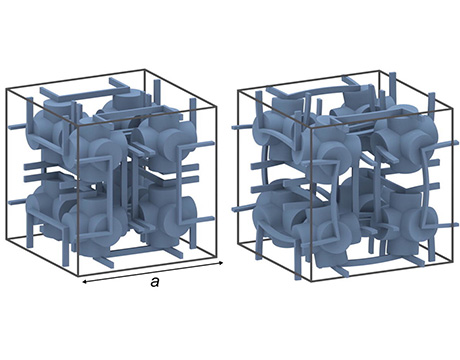 Squeeze something from all sides and it’s supposed to shrink. At least that’s what the laws of physics, to say nothing of common sense, tells us. In fact, an object that becomes larger under pressure would seem to violate the very word compression.

But Jingyuan Qu, a researcher at the Karlsruhe Institute of Technology, has created a model of just such a seemingly impossible object.

It’s a cube, filled with tiny, sealed, drum-like hollow spaces. When the pressure—be it air, or water, or some other substance—around the cube increases, the coverings to those hollow spaces warp, like a drumhead. They are connected to levers, and as the coverings warp, the levers rotate, translating the pressure to overall expansion.

“It’s not the material volume that expands,” says Qu, “but the interface where your unit cell ends. Although the material gets compressed, the overall size gets increased—otherwise it would be impossible from the laws of physics.”

The idea—and the geometry—of the cube sprang from work Qu did earlier this year on a similarly counterintuitive object. That one shrank when heated. To do so, it needed bars made of two materials with different thermal expansion properties. The difference between them made the bar bend. “We translated this bending into overall shrinking,” says Qu.

Though similar in construction, the negative compression cube uses only one material. That makes it ripe for 3D printing. In the world of 2D printing the use of three colors gives you millions of color choices. With 3D printing, we are more or less stuck with the material properties of the materials we print with. But Qu’s metamaterials may change that. By tweaking the unit structure, you will be able to determine an object’s response to compression, and—if printing with two materials—its thermal expansion properties as well.

However mind-boggling the concept of negative compression, creating the structure was fairly straight forward, says Qu. “One of the challenges was to get our minds clear as to what is happening here, and why this is not a violation,” he says. “But the actual simulations were quite easy to do.”

Qu says it’s only a matter of months before he has managed to produce an actual object with negative compressibility. Though his lab is focused on smaller scale unit cells that would be used together to created larger objects, the concept is not limited to the micro.

“Everything is scalable,” he says. “The only thing that would be some kind of issue is that with a large scale unit it might fall apart of its own weight.”

However large the units may be, they will have applications anywhere that an instrument or object needs to remain unaffected by pressure.

“You could maybe come up with something with almost zero effective compressibility—if you had some machines with sensitive parts working in high pressure environments, this would be something you could think of,” says Qu. “Maybe in a submarine which goes really deep in the ocean. The submarine gets deformed as a whole, but you want to have certain parts that do not.

“What we gain here is the ability to tailor compressibility.” Michael Abrams is an independent writer.

One of the challenges was to get our minds clear as to what is happening here, and why this is not a violation. But the actual simulations were quite easy to do.Prof. Jingyuan Qu, Karlsruhe Institute of Technology