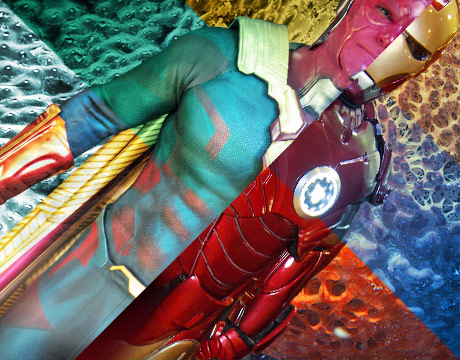 Does art imitate life, or is it the other way around? Biomimcry splits the difference and lets engineers paint with a palette of ideas from mechanical engineering, Mother Nature, and an occasional dab of Marvel Comics artistry. The resulting mash-up of weird natural-world phenomena and real-world machines is an artfully surreal nod to Stan Lee’s creative genius. Four humble life forms with mighty powers on par with Marvel heroes have inspired the recent engineering projects below.

Pumping Up the Volume

Hero for the job:Black Bolt, leader of the reclusive race of super-beings known as the Inhumans, who can level cities with his lethally loud voice and fell mortal foes with milder concussive blasts from his hands.

Bio-inspiration:The pistol shrimp is the Black Bolt of crustaceans. It’s a 2-in.-long underwater predator that stuns its prey by shooting an ear-splitting, 220-decibel shock wave from its oversized front claw. The speed and pressure of the claw’s snapping action creates inertial cavitation – characterized by a loud sonic boom, a bright flash of light, and temperatures as hot as the sun, all within a few millionths of a second.

Engineering: Engineers at the University of Southern California built a mechanical pistol shrimp claw to reproduce the same effect in the lab. Led by structural engineering professorVeronica Eliasson(who has since moved on to UC San Diego), they built a 14:1 scale model of the claw’s geometry with a motor-driven torsional spring actuating its snapping action. They quantified the cavitation dynamics to develop a field-deployable machine that quickly, reliably kills micro-organisms in water with pistol-shrimp-level heat and pressure. “If we can harness that destructive power into something good, imagine what we could do,” says team member Austin Simons. The crowdsourced project recently took top honors in the Animal Superpower Challenge, earning $1,500 grant from the web-funding groupExperiment.

Hero for the job: TheWolverine, a mutant fighting machine with an indestructible metal-infused skeletal system that stands up to powerful force injuries.

Bio-inspiration:The orange puffball sea sponge, like the Wolverine, has a skeleton that won’t buckle under pressure. This member of the glass sponge family thrives under constant underwater tidal pressures that would squeeze the life out of other sponges. The puffball’s squishy, spherical shape – which it needs to filter nutrients and oxygen from seawater – is protected from within against buckling by a reinforced skeletal system that could teach human architects a thing or two about structural mechanics.

Engineering: Brown University engineers Haneesh Kesari and Michael A. Monn were the first to learn what’s behind the orange puffballl’s resilience against buckling. With scanning electron microscopy, they probed its skeletal substructure to find thousands of tiny, slender silica reinforcement rods with a shape unlike that of anything previously seen in natural or human architecture. These rods, or spicules, are 2 mm long and about as thin as a human hair, but are tapered along their length: each end is thinner than the middle section.

Given the puffball’s superior buckling resistance, the researchers explored whether the tapered shape of its spicules had previously been used for structural members in modern engineering as an alternative to the ancient, ubiquitous cylindrical column. Their search took them all the way back to an obscure 1851 theory of structural design that proved the superiority of tapered members over cylinders in buckling resistance. Although never used in practice, tapered columns matching Clausen’s optimal profile were experimentally proven a century later to hold 33% more compressive load than plain cylinders.

Kesari and Monn’s work reproduced that result and the engineers believe it’s the first step toward a new generation of 3D-printable, failure-resistant structural members for use in everything from buildings to biomedical implants to bicycle spokes. "This is one of the rare examples that we're aware of where a natural structure is not just well-suited for a given function, but actually approaches a theoretical optimum," Kesari says.

Challenge: Developing materials that give robots a less-mechanical, more human-like texture and range of motion for use in delicate applications such as robotic surgery.

Hero for the job: The Vision, an android so lifelike he even has a human wife. Programmed with human brain circuitry, the Vision has many soft skills including emotions and free will. With power to control his body density, he can also become intangible when the job calls for a softer touch.

Bio-inspiration: The glass eel larva, a virtually transparent, hydrogel-like fish with surprisingly effective survival skills. The tiny creatures are born in the ocean but migrate as juveniles to freshwater habitats. Surviving that journey requires them to swim fast against the strong currents, which they achieve by constricting and releasing their long, flat bodies in a powerful towel-snap-like maneuver that lets them pass through water as easily as the Vision walks through walls.

Engineering:The field of soft robotics is devoted to endowing future robots with materials, sensors, and actuators that more closely emulate human feel and movements. A team of MIT engineers led by Xuanhe Zhao and Hyunwoo Yuk looked to the glass eel for inspiration in developing new hydrogel materials for safer, softer materials for robots that come in direct contact with humans. Their hydrogels are 3D printed into soft, hollow shapes that can be actuated with external water pumps to perform subtle movements like stretching or curling. The idea is to soften and humanize robot-human interactions so robots can be used for tasks requiring delicate or sophisticated movements like surgery, patient rehabilitation, or handling hazardous materials. “To our best knowledge, this is the first demonstration of hydrogel pressure-based acutuation,” Yuk says. “We are now tossing this concept out as an open question, to say, ‘Let’s play with this.’ ”

A Beetle in Shining Armor

Challenge: Designing stronger, lighter advanced materials for next-generation applications. Hero for the job: Iron Man, who has employed every known – and many unknown – composite fabrication method to create his ever-expanding wardrobe of weaponized armor. Bio-inspiration: The figeater beetle (Cotinis mutabilis), whose extraordinary exoskeleton is harder than aluminum yet light enough to permit the beetle to fly. Its iron cladding is reinforced by twisted bundles of nanofibers made of chitin polymer chains and wrapped in proteins. Layers of these fibers are stacked, plywood-style, in a helicoid pattern known as a Bouligand structure.

Engineering: A group led by Northwestern Engineering’sHoracio D. Espinosais studying beetle exoskeletons – beginning with the figeater – to understand and hopefully make use of their underlying design principles and mechanical properties in new manmade materials. They developed novel workflows for optical and electron microscopy and x-ray analysis to characterize the geometric and mechanical properties of these tiny assemblies. “It is very challenging to characterize the properties of such fibers given that they are directionally dependent and have a small diameter of just 20 nanometers,” says Espinosa. “We had to develop a novel characterization method by taking advantage of the spatial distribution of fibers in the Bouligand structure.” Having worked out these methods, the group plans to collect and correlate data from other beetle species in search of nature’s optimal design combination for high-performance structures. Although the bugs, sponges, and fish featured here would come up short in a fictional face-off with their super-powered Marvel analogs, these humble creatures have inspired technologies with the potential to overpower established engineering standards.

For Further Discussion
This is one of the rare examples where a natural structure is not just well-suited for a given function, but actually approaches a theoretical optimum. Haneesh Kesari, Brown University