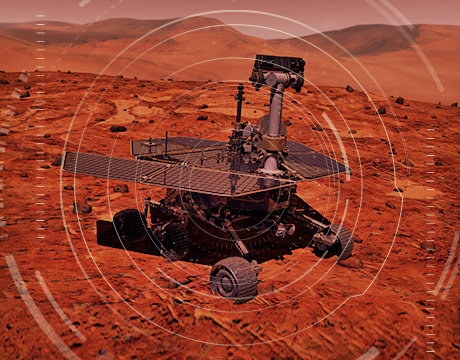 Mars on Their Minds

The Mars Society’s “University Rover Challenge” leads educational institutions from around the world to build Mars rovers for high-level competition. More than 60 teams from 12 countries entered in 2016 and roughly half that survived the initial cut and descended on the small town of Hanksville, UT this past June to compete in the field. Among U.S. hopefuls were Yale University, Cornell University, and Washington State University (WSU) North Puget Sound at Everett, which took second place.

The president of the WSU North Puget Sound engineering club described the rover they entered in the Challenge.

“You knew the rover had to fit through a two-meter wide gate but the main thing is weight. It’s a 50-kg weight limit so there was a big design challenge when it came to chassis and suspension and getting over these rocks that are borderline boulders and going down a half-meter and meter drop,” says Blaine Liukko, who has a bachelor’s degree in mechanical engineering from WSU. “The main thing our team did to overcome challenges was with the use of carbon fiber. Janicki Industries gave us carbon fiber panels that we cut with a waterjet and we custom designed our own wheels out of carbon fiber so we could have lightweight wheels. We were also able to mount motors and gear reducers inside the wheels. This way, it would help with ground clearance issues.”

They designed their own suspension and all motor mounts were carbon fiber," he says. “We did enough structural analysis and motion studies to know maximum forces,” he explains. “We had four wheels on our rover and each wheel was powered independently with a DC motor and a 64-to-1 gear reducer.”

The robotic claw didn’t work well with an RC servo, according to Liukko, so they utilized one with a power screw and a gear DC motor, that gear motor mounted in the middle of the claw.

“The rover, in the end, was roughly three and a half feet wide by four feet long, all radio controlled.”

They made the initial cut, so now it was time for the next step.

Competing in the Field

The first day’s competition results would decide which teams would make the final cut and perform more difficult tasks, he says.

“You had to traverse the rover over to a service station and, using a camera on a robotic arm, you had to read a piece of paper and it was a multiple choice question,” Liukko says. “With the robotic arm, you had to pick either an A, B, C, or D switch. There were points for being able to flip the switch and also for being able to flip the correct one. After that, there were different obstacles and you even had the challenge of picking up four tools and putting them in a different area. We did fine but saw some areas for improvement in terms of our depth perception, among other things.”

After the cut was made, the final day consisted of four tasks, he says. The soil sample part required digging and analysis, with Liukko’s team excelling here and ending up with 90 out of 100 points. The second task contained a challenge of picking up a gas can and putting it in a gas tank. The third, another highlight for the team, was a traversal task. “There were five different gates to go through and they are all around the ‘Mars landscape,’” he says. ‘We didn’t miss a single gate and didn’t go out of bounds. One gate was 50 feet up a hill, there was another where you go traversing rocks and boulders and you’re trying to do it without going out of bounds.”

The fourth task was about astronaut assistance and involved picking up tools and getting them to each astronaut. “There were some difficulties here but we had less of a problem picking up tools than a good portion of teams,” he says.

When the final results were announced, Liukko was thrilled with the second place finish. Rzeszow University of Technology in Poland impressively took first place for a second year in a row. “I think our team will be back to try and see if we can do even better,” Liukko says. “The great thing is we saw areas to learn from. But it’s more than a competition. The life experience it gives to students before going out into the workforce is incredible. You’re given sets of tasks that really push you and it’s a great feeling to be a part of likeminded people from all around the world that want to be a part of this.”

For Further Discussion
It’s more than a competition. The life experience it gives to students before going out into the workforce is incredible. Blaine Liukko, Washington State University North Puget Sound at Everett