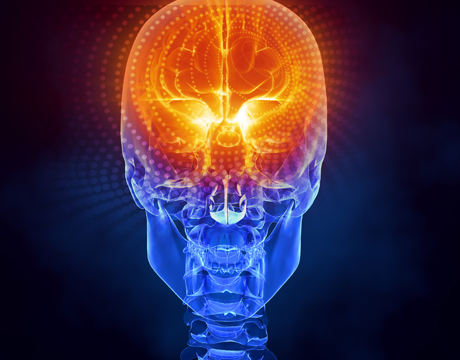 Researchers interested in imaging the brain have long desired to study the stiffness of brain tissue as a way to show changes in the structural integrity of the brain during disease. Although magnetic resonance imaging (MRI) can identify aspects of brain structure and function, it has not been very helpful in mapping the mechanical properties of the brain, such as tissue stiffness. This may soon change—a tool called magnetic resonance elastography (MRE) is showing promise in recent lab tests.

MRE is a noninvasive method for measuring the mechanical properties of tissues. Vibrations are generated using a device that stimulates the head similar to a handheld massager and is comfortable for the subject.The vibrations create internal tissue displacements of only a few microns, which can accurately reflect tissue stiffness—a potentially significant indicator of tissue health.

MRE has become very popular for studying fibrosis and cirrhosis, which drastically change the stiffness of the liver. However, since the brain is mechanically complex, with distinct structures exhibiting different elasticity and anisotropy, standard MRE has not been able to accurately measure mechanical properties.

“Previous studies have not been able to capture local mechanical values in the brain due to shortcomings in imaging technology,” says Brad Sutton, a bioengineering professor at the University of Illinois at Urbana-Champaign. “This has limited clinical studies that would target properties of a specific structure or region of the brain.”

To capture the local properties of the brain, higher-quality MRE images are needed that measure displacements in three dimensions, with high signal-to-noise ratios (SNR).

To meet this challenge, Sutton and fellow professor John Georgiadis from the Department of Mechanical Science and Engineering at University of Illinois, Urbana-Champaign, along with graduate student Curtis Johnson and professor Keith Paulsen from Dartmouth College, have developed an innovative brain MRE method that can measure the stiffness of brain tissue. This may lead to earlier detection of disease states in the future.

The challenge in measuring local mechanical properties of brain tissue is developing an MRI acquisition scheme that captures high-fidelity MRE data during a comfortable and safe subject exam. Spatial resolution must be increased without compromising image acquisition speed or SNR, the hallmark of data quality.

“In the past, researchers have used very fast, single-shot acquisitions for brain MRE to minimize the necessary scan time,” says Sutton.

These acquisitions capture the entire image in a single pass, which is advantageous for many applications, although it has its drawbacks. “For high-resolution needs, these approaches suffer significantly and lead to poor data quality, which in turn makes the estimated stiffness unreliable,” he says. Overcoming these limitations with standard techniques generally requires longer scan times, making them infeasible.

Sutton’s new brain MRE sequence is based on multishot spiral imaging that draws on his previous experience with other brain-imaging applications. Spiral imaging is a popular, fast-imaging technique that is very flexible and allows researchers to tradeoff between resolution, SNR, and acquisition time for different needs.

“Spiral imaging is uniquely suited for MRE and we have been able to acquire high-quality datasets with improved spatial resolution, without a significant increase in scan time,” says Sutton. To date, this acquisition is capable of generating brain MRE data at the highest-reported spatial resolution. This has enabled significant new findings about local mechanical properties of the brain.

The method was tested on a gelatin model to determine if the improved spatial resolution would play a role in estimating the properties of small, embedded inclusions. Measurements were also taken on the brains of healthy volunteers to investigate the mechanical properties of individual structures in the brain that have specific roles in brain function.

The research demonstrated that spatial resolution does play a significant role in characterizing local variations in viscoelastic properties. MRE stiffness maps successfully identified the inclusions in the gelatin model, and higher-resolution acquisitions were capable of more accurately estimating the true properties of the inclusions. Measurements on brains of subjects were able to identify specific white-matter structures, including the corpus callosum and corona radiata, as being stiffer than the surrounding brain tissue. This is a significant improvement over the lower-resolution MRE brain studies that only report volume averaged stiffness values.

“Our qualitative evidence shows that high-resolution MRE is capable of resolving local variations in tissue stiffness that correlate with the white matter structures in the brain,” says Sutton. “To our knowledge, no other reports delineating brain structures directly from MRE stiffness maps to this degree have been published.”

Future work will quantify the mechanical properties of individual structures in the white-matter architecture using this technique, and may bolster the clinical applicability of brain MRE.

“In the next few years we will hopefully have brain MRE adopted for a clinical setting, where it can be used to detect subtle changes in brain tissue in the early stages of disease,” says Sutton. “Further, using multiple non-invasive measures from MRI, we will be able to characterize a range of microstructural changes that accompany disease or normal aging processes.”

Qualitative evidence shows that high-resolution magnetic resonance elastography (MRE) is capable of resolving local variations in tissue stiffness that correlate with the white matter structures in the brain.