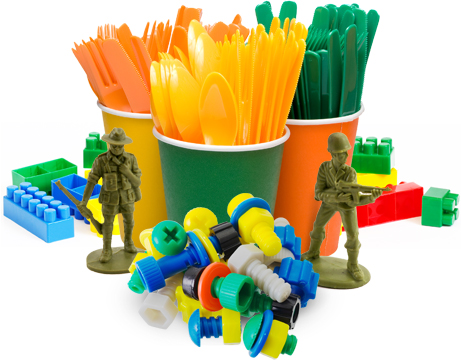 Most of us live surrounded by “stuff.” And most of that stuff is not an iPad, or a 787, or a Tesla Model S. It’s plastic. The pens you picked up at the drug store, the shopping bags stuffed in the pantry, the caps to your jars, most toys, containers, disposable utensils—and the wastebasket you dispose of them in—all have the ring of low-tech. And yet every keychain or mouse pad you’ve ever taken home as swag has been produced with a high level of know-how and its own unique set of problems. Whatever its apparent simplicity, a significant amount of engineering, problem-solving, and cutting-edge technology went into the creation of even the flimsiest spork.

And, if the product was a product of the U.S., you can be sure there was an additional dose of ingenuity thrown in just to keep the job here.

“In some ways it’s the cheaper parts that will be the trickiest,” says Mike Jones, general manager at Peliton Plastics, Valdosta, GA, producers of buckets, whisks, and frisbees, to name a tiny fraction of their output. When it comes to injection molding plastics, once a product has been designed, the chief difficulty in producing it is dealing with a material’s potential to shrink and warp. “Some materials are easy to work with—high-end polystyrene—those materials don’t shrink a lot, and those parts are usually good parts on the first run,” says Jones.

Other plastics, like polypropylene, require years of experience to handle properly. While it’s true that any material supplier should be able to cough up the appropriate numbers, relying on them is sure to lead to adjustments, fixes, and a loss of efficiency and profit. “Any time you’re going to build a mold, you have to tell the toolmaker what shrinkage to use,” says Steve Erickson, vice president at First American Plastic Molding Enterprise, South Beloit, IL, a company that makes parts for medical equipment, parts for car speakers, other automotive doodads, and those plastic utensils mentioned above.

“When you’re using a commodity material, like polypropylene, if you go back to the supplier, they’ll say it might be plus or minus a 30,000th of an inch. From a legal standpoint, they tell you as wide as they can tell you. We try to refine it by saying ‘What does our past documentation tell us?’ If possible, we’ll go measure a past part, and then measure the mold and see what the shrinkage might be.”

Sometimes though, the shrinkage can’t be known with great enough precision. Where tolerances are tight, “sometimes shrinkage and warping can be solved with longer cycle times, changes in pressure and flow rates,” says Jones. Or, in the worse case, steel can be added or subtracted from the mold.

Shrinking plastic is one problem. Shrinking customer base is another. Competing with overseas means U.S.-based companies must find ingenious ways of keeping costs low. Often the first step is to try to convince a client to use a cheaper material. “Sometimes that’s the only way to keep the job,” explains Erickson. Heavyweight customers, such as automotive companies, usually require that costs go down each year. “They tell you that year you’re going to get better at it. But the quandary is that you’re already taking into account future ways you’re going to learn in your original price quote.” And sometimes customers will reject substituting a commodity material, or fill, for an engineered one.

There are other tricks to keeping costs low. Molders overseas stay competitive thanks to (for now) lower labor costs. First American trumps that by removing the labor altogether. “We have a blend of robotics and lesser sophisticated handling techniques that don’t require laborers,” says Erickson. “You almost have to have a lights-out operation to meet the price point.” And that phrase is only partly figurative: another way First American saves money is having motion detectors trigger the lights so they’re only on when needed.

Erickson has scared off a number of inexperienced entrepreneurs who assume that a cheap product can be made cheaply. “Even with the least sophisticated approach, and the least cost approach, they don’t understand just how much it costs or what it takes to have a molded part,” he says. It’s $10,000 just for the mold, for instance. “There’s a naivety with people who have a wonderful idea. We often have to open their eyes.”

The Peliton approach to staying competitive is simple: make less money. “When we build a mold in-house, we try to not make a whole lot of money. We give them a good deal,” says Jones. As a result, their prices are not dissimilar from those found overseas. “We don’t beat them, but it’s close enough not to justify the hassle of dealing with an Asian supplier.”

Though the challenges of building a complicated part—and at minimal cost—offer their own rewards, sometimes the quotidian offers greater satisfaction. “It’s maybe not quite as much fun, but it’s nice when you get really good robust designs, good tools, and you shoot out the part a week early and the customer is happy,” says Jones. “That’s also rewarding.”

When we build a mold in house, we try to not make a whole lot of money.Mike Jones, Peliton Plastics