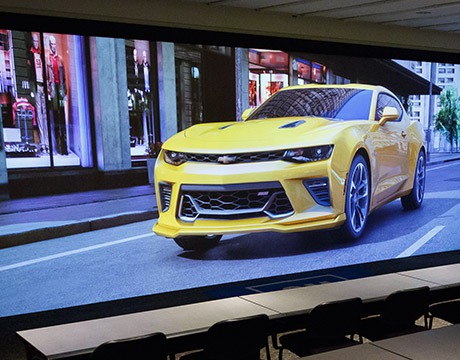 Virtual reality is being used from the initiation of a program to a prototype. Image: General Motors

What was science fiction once is now a reality not only in gaming, but also in automotive manufacturing. Car manufacturers, such as General Motors and Ford, are increasingly using VR to test design plans, tolerances, and safety features in virtual environments to ensure their products are evaluated at a very early phase of the process, thereby reducing the time and costs.

“VR has enabled us to shorten the vehicle development process in many ways,” says Joe Guzman, engineering group manager, Vehicle Assembly Structure and Virtual Reality Center at General Motors. “It offers the ability to very early in the development process make decisions in an accurately represented manner in a life-like representation of the vehicle that in many years past would have required a physical property,” he says.

Gone are the days of clay, wood, or metal models. “VR enables the designers and engineers to view the products in 1:1 ratio in a real setting. It can actually turn around realistic models onto one scale within a day where as if you were to build a physical prototype it would probably take up to a few weeks or months,” says Joe Alef, a senior global visualization specialist at GM.

The use of virtual technologies allows designers and engineers to see, assess, and modify a considerable number of variants. The virtual data is displayed on a monitor, a large projection screen, or Cave Automatic Virtual Environment (CAVE) – an immersive virtual reality environment where projectors are directed to multiple walls of a room-sized cube.

The CAVE provides an environment where designers and engineers wear 3D glasses and become completely immersed in the computer-generated graphics of the exterior and interior of a vehicle. They can then evaluate mirrors, placement of controls, and design quality, such as gaps, fits, and finishes.

The CAVE solution was developed by the University of Indiana in the late 1970s so it is not new, says Guzman, who has been using the technology since it was first installed at GM in the year 2000. It has, however, undergone a major upgrade in the last three years. GE’s technical center in Michigan, Detroit, has two CAVEs and two more are under construction in Europe and China.

“What we have here is a four-walled CAVE, smaller than the design center. Theirs is eight feet and ours is a six-foot CAVE,” explains Guzman. “The design center utilizes the cave for aesthetic purposes while we do for engineering and manufacturing purposes,” he explains.

“We have done a lot of global dimensioning and tolerance studies, visibility studies from the drivers perspective to detect any object variation between the wind shield and mirrors, reflection studies from inside rear-view mirrors and outside studies,” says Alef.

Every program, vehicle, and platform utilizes VR at GM. According to Guzman, VR is being used by different groups on different days for decisions being made in the physical development process from the initiation of a program to a prototype. “It’s a validation of what they are seeing in the physical world translated correctly from what they had done in math on a computer model,” he says.

Safety is another parameter being evaluated using VR. “We have taken CAE crash simulation data; one of our demo math data for a vehicle that went into production last year. We took the crash data put it into 3D rendering using 3DExcite DeltaGen software. As you are developing these parts early on in the development process, you can optimize them for weight strength and how they react under crash conditions. That’s how we are making the vehicles safe,” says Guzman.

GM is not alone in the use of VR. Other automakers are using it for design, engineering, and manufacturing purposes. Ford, for example, also has a lab outfitted with VR technology to raise manufacturing quality.

So what is its future outlook? Guzman believes the entire virtual world will become fully integrated into the design process, fostering increased collaboration between designers and engineers. “The VR tools will have a place in a meeting room to collaborate much the same as it used to be when engineers and designers would meet around the car down at the shop. They are going to collaborate around these VR properties and it will be more integrated into the fabric of the design process. Every decision will be based on this.”