Building Equipment Contractors Electric Power Electrical Equipment and Appliance Manufacturing Road Transportation Transportation and Aerospace Manufacturing
Much attention is being paid to the emerging electric car market, but the emergence of zero-emission, heavy-duty trucks also is poised to accelerate in the next few years. According to CALSTART, a nonprofit organization dedicated to clean transportation development, the numbers of new-generation trucks will increase globally by nearly 80 percent between 2020 and 2023, from 40 available or announced models to 71.

CALSTART’s online tool, Drive to Zero’s Zero-Emission Technology Inventory, shows the number of available heavy-duty truck models in the U.S. market, jumping from eight in 2020 to 28 in 2023, for a whopping 250 percent spike. For now, most zero-emission heavy-duty trucks have a range of 186 miles on a single charge. That will jump when the next round of trucks becomes available this year and 2022 with models capable of getting close to 373 miles on a single charge.

That range could increase even more to 621 miles per charge based on Tesla’s Elon Musk comments. He has claimed the Tesla Semi could approach that target. Production of the vehicle has been delayed to 2022.

“The pace of battery technology advancement is happening faster than we thought, and battery costs are also dropping faster than anticipated,” stated Cristiano Facanha, global director of CALSTART’s Global Commercial Vehicle Drive to Zero program. “As a result, newly available zero-emission trucks generally and heavy-duty zero-emission trucks, in particular, are shifting toward commercialization at an accelerating pace.”

CALSTART’s findings show that overall numbers of zero-emission commercial vehicle models are growing globally despite the global pandemic’s economic impacts. The number of available models is projected to rise from 468 in 2020 to 557 in 2021, 594 in 2022, and 606 the following year.

The U.S. should see a sharper uptick in available zero-emission heavy-duty truck models on the market compared to the rest of the world. While the range will continue to rise, CALTRANS points out the existing 186-mile range is ideal for short hauls and work within towns and cities. 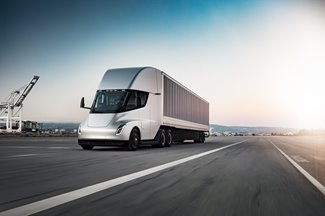 The Tesla Semi is just one of many EV trucks that will hit the road next year. Photo: Tesla
Still, a viable charging infrastructure must be established to fuel the anticipated growth of electric vehicles. One effort is a network of ‘megacharger’ stations, to be rated for charging at up to 4.5 MW, or 3,000 amps at 1,500 volts direct current being developed through Charging Interface Initiative (CharIN). The group’s members include more than 200 international industrial and automotive companies working to develop a standard charging system for heavy-duty electric vehicles.

A CharIN task force is working on standards, especially for Class 6-8 commercial vehicles with large battery packs and the ability to accept a charge rate greater than 1 MW. It is expected to finish a specification document by the end of 2021 that includes plug geometry.

Initial forays into the charging market have begun. WattEV is a California startup that recently announced plans to build what may be the nation’s first 25-MW, electric-only public truck stop at a heavily traveled intersection at the southern end of the San Joaquin Valley in Bakersfield. It will include a solar microgrid with battery storage along with energy from the grid. It will open with a 4-MW output and be built out to 25 MW for at least 40 charging bays.

The firm also is pushing for quicker adoption of heavy-duty electric rigs through what it calls Trucks as a Service. It has reserved 50 Tesla Semis already and has plans to place more orders with other manufacturers. It believes the approach will speed the adoption of electric trucks in California and elsewhere.

“Focusing on the revenue and profit potential of an electric truck, rather the fixed and variable cost of owning a new or used diesel truck, is how can get more drivers into more electric trucks more quickly,” said WattEV CEO Salim Youssefzadeh. “Waiting for the market to mature organically…could take more than a decade. Our aim is to fast-track the transition to electric truck transport by doing things a little differently.”

Daimler Trucks North America also is moving on electric trucks. It recently opened a heavy-duty electric truck charging site across the street from its headquarters in Portland, Ore. It is open to the public for all levels of EV charging and provides for current chargers to be replaced with new technologies as they become available, including 1+ MW chargers.

The openings follow other private efforts to build out EV charging technology for cars and small trucks and vans. Electrify America, a subsidiary of Volkswagen Group of America, is investing $2 billion over 10 years in zero-emission vehicle infrastructure and access. It has built some 600 sies and 2,600 fast chargers throughout the U.S. in three years. By the end of 2021, it projects to install or have under development 800 stations and 3,500 fast chargers in 20 metro areas and 45 states. Two cross-country routes were completed in 2020.