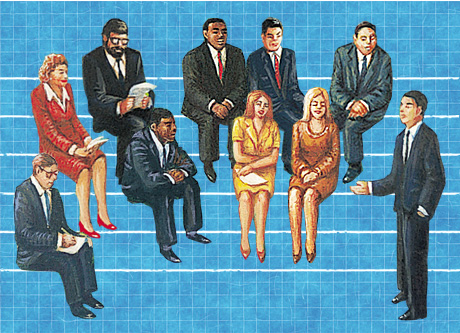 Working with people from very different backgrounds can be stimulating and educational. When you're the manager of a diverse staff, the essential tools are keeping an open mind, being alert to any discomfort among employees, and developing sensitivity to cultural variations.

This need not be difficult. "Just take an interest in learning about the cultures your staff members come from," advises Vincent Seglior, who was the World Trade Institute's director of international training for 12 years. "It's a give-and-take. You'll find out about their cultures and they'll discover more about ours."

Professionals who come from other countries for a job in the United States are often very tech-savvy and may speak English well, perhaps having learned it as a second language, Seglior found. "So outwardly, they seem similar to us in many ways. But deep down, their values may have been shaped by religion or their own cultural orientation. As a U.S. manager, try to find out about the values and the diverse cultures of your team. Always keep in mind that no one culture is better than any other, they're just different," he stresses.

Seglior notices some variations in business attitudes. In North America, especially in large cities, a 'time is money' attitude is common, keeping many professionals in a frequent rush. "That means Americans tend to get down to business quickly. But many countries have a different perspective, and people aren't in such a hurry. They may prefer to get to know a colleague before they start working together," says Seglior, now principal of Seglior Solutions, a career-coaching company based in New York City.

Teamwork is an area rich in cultural nuance. "Some societies, such as Japan, have a strong inclination toward collaboration, and wanting to be part of a group. Americans are often more individually oriented," says Seglior. "It may take a bit of an adjustment for someone to make that shift in order to be comfortable at a U.S. employer."

It can feel like a different world to come and work in the U.S. "Try to empathize with each employee," Seglior suggests. "Be supportive. Show that you're with them. If you just listen and observe, you'll start to understand their perceptions and feelings. Sometimes it helps to reframe a question the employee asks, to make sure you've interpreted it correctly. Reframing the question also signals that it matters to you to have a clear discussion."

A very sensitive issue is different taboos around the world. It's important to be careful about certain words and gestures. For instance, making a little circle with your thumb and forefinger signals "OK" in the U.S., but it's an obscenity in Brazil, Seglior learned. Humor is particularly delicate. "Be careful what you're kidding about," he cautions. "What's considered funny in North America is not necessarily well-received or understood in all cultures." To become familiar with (and avoid) these potential offenses, he recommends any of the well-respected, widely available books by international marketing expert Roger Axtell, especially his classic, "Do's and Taboos Around the World: A Guide to International Behavior."

Another variable is attention to promptness. "I'm a New Yorker, and super-punctual," says Seglior. "I show up for meetings on the dot, but other cultures — even some different regions of the U.S. — may be more casual about time." You may want to talk privately with a particular employee, very gently, about expectations in terms of keeping appointments for meetings or conference calls in your department.

If you're moving to a new department, or getting several new employees, expect an adjustment phase. "Some training companies specialize in orienting foreign-born professionals coming to their first job in the U.S. Your HR department may also be able to provide some type of assistance, if needed," says Seglior.

The best tactic for managing a diverse staff is to keep reaching out. Talk to your team members, especially the new hires, individually. Learn about where they're from. "In the U.S., we have professionals from all over the world. Is there someone at your company who comes from the same place as your new employee? Could he or she be a mentor for your staff member, or help you understand a little about their culture?" Seglior asks.

He believes in holding an orientation session anytime there are personnel changes in your department. "Be upfront about what to expect in the company culture, and also in the broader U.S. culture if many of your team members grew up elsewhere. Be a manager who develops open relationships with your diverse staff. Talk to them positively, both in a group and individually. If you remain curious, receptive, and open to learning about their different cultures, your staff will benefit — and so will you," says Seglior.

Carol Milano is an independent writer.

No one culture is better than any other, they’re just different.Vincent Seglior, principal, Seglior Solutions