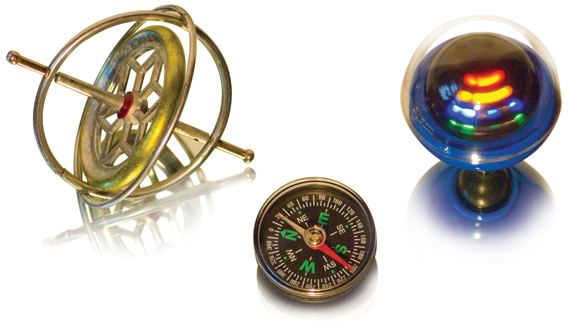 This toy gyroscope, magnetic compass, and spinning top have neither lubricants, special materials, nor rolling elements, yet display low friction techniques in their designs.

Engineers have plenty of technology for controlling friction and wear, including naturally lubricious materials, high-performance lubricants, and rolling element bearings. But according to Michael French, emeritus professor of engineering at Lancaster University in the United Kingdom, good mechanical design related to friction starts with practicality.

In a list of design principles, he recommends, “Prefer pivots to slides, and flexures to either.” In other words, follow a few simple guidelines, and designs will be more robust against the unknowns and undesirables of friction. The goal is to reduce frictional forces to be insignificant compared to other forces in a device.

French maintains that managing friction starts with the mechanical design schemes and the least preferred are slides, or more accurately, linear motion. Linear slides don’t work well because they require lots of space, generate high loads, and often stick or jam. Consider the sticky bureau drawer. Whether or not the drawer locks up depends on the length-to-width ratio (L/W), the ratio of length to load position (L/X), and the coefficient of friction, µ.

Leading tribologists admit that friction and wear are not fully understood. Michael Kotzalas, chair of ASME’s Tribology Division and author of a book on bearing analysis, says, “We know that materials behave differently based on testing." But the mechanisms of friction are complicated and interdisciplinary. “There are still just a lot of theories (about friction) and a lot of debate around them,” he adds.

Peter J. Blau, leader of the Tribology Research User Center at Oak Ridge National Laboratory, warns that the traditional “laws of friction” are not laws but “a convenience that allows comparing the relative sliding resistance for various materials or lubricants to one another under the same conditions.” He adds that the traditional single static and single dynamic coefficients of friction are misleading because they do not reflect fluctuations and transitions.

Most effective for reducing friction are often-overlooked flexures, which have the advantages of no friction, no maintenance, and no lubrication. The lack of friction means flexure-defined motion is smooth, predictable, and reliable.

One might also consider more complex geometry for the contacting surfaces to improve performance in sliding, journal, roller, and ball bearings. Says Kotzalas, also Timken’s chief engineer of product design for bearings: “You can design a profile (for a roller) to operate with the least torque under the majority of your conditions.” But outside those conditions, at higher loads for example, the profile “can deform and bring in more contact area to carry the load,” he says.On French’s design principles list, this is: “Make the critical case the cruise case,” meaning it is acceptable to sacrifice friction performance in transient conditions if the general condition is improved.

Relationship of Friction and Wear

Mechanical design engineers also need to consider wear. Manufacturers of standard bearings can usually supply wear and reliability data, but if the geometry or conditions are unusual, individual test results are needed.

“High friction does not always equate to high wear, and generally, self-mated metals don’t fare as well as dissimilar metals for friction and wear,” Blau says. The same is true for plastics, where, generally, it is also best if at least one material is naturally lubricious, such as nylon, acetal, some polyesters and PTFE. According to Zan Smith, retired staff engineer with plastics resin supplier Ticona, the crystalline materials—of which acetal, nylon, and polyester are examples—offer the best performance for friction and wear; additives, such as PTFE and silicone oils, are commonly used for improving performance.

Smith, whose expertise includes plastic gears, warns, “Some combinations [of plastics] have real good wear performance, but high friction,” meaning again that friction and wear do not equate.

What is known about friction in mechanical design:

What can be done to manage friction:

Or you can just say, “Prefer pivots to slides, and flexures to either.”

[Adapted from “There’s the Rub,” by James G. Skakoon, for Mechanical Engineering, January 2009.]

Prefer pivots to slides, and flexures to either.Michael French, Emeritus Professor of Engineering

Article
Infographic: The Growth of Additive Manufacturing in Aerospace

Additive Manufacturing Collection
Companies like Boeing and Airbus, use additive manufacturing for several applications including prototyping and end-use production parts. Article
Can Manufacturing Respond to the Great Resignation?
Maintaining the nation’s manufacturing base means finding replacements for an aging cohort of technically skilled workers and engineers via internships and R&D.