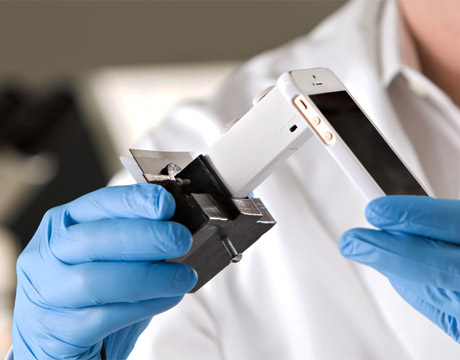 MOPID has the potential to rapidly diagnose malaria by providing microscopic resolution on a cell phone. Image: Texas A&M University

Bioengineers at Texas A&M University have combined a smartphone’s camera with optics to create a polarized light microscope that could be used to detect malaria. The mobile-optical-polarization imaging device (MOPID) has the potential to rapidly diagnose malaria by providing microscopic resolution on a cellphone, with the same level of accuracy as benchtop spectroscopy.

According to the latest estimates from the World Health Organization, there were 214 million new cases of malaria and 438,000 malaria deaths worldwide in 2015. However, rapid diagnostic testing, introduced widely over the past decade, has made it easier to distinguish between malarial and non-malarial fevers, enabling timely and appropriate treatment.

MOPIDis a step in that direction. After the device is attached to the phone, the diagnosis could take just minutes using an app.

“From the proof of concept to now, the biggest challenge was to get the lens optics right so that we can get the microscopy resolution we need but in a small form factor,” says Professor Gerard L. Cote, director of the Center for Remote Health Technologies and Systems, and the Charles H. & Bettye Barclay Professor in the Texas A&M Department of Biomedical Engineering.

Cote was inspired to create the device after conducting a summer study abroad program organized by Engineering for Global Health in Africa. “A part of that study is to teach students to fix medical equipment in developing countries, where there is lack of resources, and the second part of the project was to design low-cost methods for diagnostics that would work in those countries. So I took upon myself the same task that we were asking the students to do,” he says.

Currently, malaria is diagnosed with a big benchtop microscope that needs a trained technician to operate it, explains Cote. “The blood samples are usually sent to a central lab, but there aren’t many central labs or the expertise to read the slides, particularly in remote areas with low-resources. So I decided to design a cellphone-based device,” he adds.

According to Cote, there are two key things that enable accurate imaging of the malaria pigment known as hemozoin: “By using cross polarized light we can get a better contrast and by making the optics smaller and usable on the cellphone camera itself we can get resolutions down to about 2.1 microns.”

The actual imaging is pretty quick and depends on how many samples you take. “Typically the blood sample is on a cartridge,” Cote explains further. “The device images a blood sample using polarized light that can detect the malaria parasite byproduct, the hemozoin crystals, which appear as bright dots in the image. That’s a key indicator of infection.”

The team is still developing the algorithms for automated detection through an app that would take the image and automatically count the number of red blood cells and malarial parasites over different fields of view. “The idea is there should be enough to make the decision to diagnose. We can automate that process using the app,” says Cote. “It would probably take longer to collect the blood than to run the algorithm,” he adds.

Although Cote and his team have tested MOPID in the lab with both iOS and Android, the placement of the camera varies in each smartphone. “When you build the optics polarizers and the cartridges for the blood, you’ve got to have it in line with the camera to get the best results. We haven’t started app development yet so we don’t know which platform will be easier for developing it.”

One goal is clear: As much as possible, they aim to do the processing on the phone itself. Cote is now gearing toward doing field studies in local hospitals in Rwanda, Africa this summer. “The WHO and some NGOs have shown interest in our device,” he says.

When ready for commercialization, MOPID could cost approximately $50. “There are recurring costs of disposable cartridges, however, that have to be made cheaply. We envision the cartridges to be available for less than a dollar,” says Cote.

Although not yet in mass production, MOPID shows the potential to detect malaria at much lower cost and complexity, just like few other smartphone-based devices such as Lifelens, xRapid, and Matibabu are trying to achieve. This is particularly important for remote areas and in low-resource settings, where the medical infrastructure is often limited or nonexistent.

For Further Discussion
It would probably take longer to collect the blood than to run the algorithm.Prof. Gerard L Cote, Texas A&M University