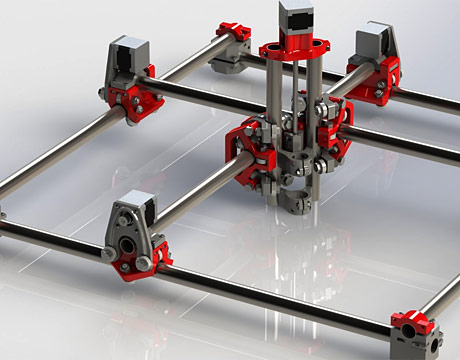 Making Your Own CNC Machine

Having your own CNC (computer numeric control) machine is only a dream for many engineers when you consider the cost. Ryan Zellars, a maker with a bachelor’s degree in mechanical engineering from San Diego State University, felt the same way, until he decided to get printing.

“I was using what I had learned from 3D printers, ramps, and open source firmware to try and 3D print a CNC machine,” he says. “I started with a corner block and sat it on a dining room table and a month later I had a full machine working. I don’t know, I just had to have it and I just thought I could make it happen,” says Zellars.

According to Zellars, the biggest challenge was the linear rails. “They’re very costly and heavy,” he says. “These things are hundreds of dollars for some polished steel rods. Instead, I grabbed a piece of conduit and it was about three bucks, something I was hoping would carve foam. I started with a corner block to set the 90-degree angle and printed one off, printed one corner piece off, and thought it would work and printed all four. Then I printed the basic shape on the table. I also found ways to put the bearings on there.”

The geometry is an XY cross gantry, he says, instead of a sliding gantry, as is typical of CNC machines. “I use stepper motors and the motors that drive it all make it move,” he says. “It adds precision control and the ramps are the brain. It uses a very minimal power supply because it doesn’t have anything to heat up. It’s pretty DIY and industrial, but for the most part it looks pretty simple.”

Up for a Challenge

He felt challenged to show what it could do and even surprised himself. “Some people thought it couldn’t do anything but foam and my first video was milling aluminum with the machine,” he says. “That was a great feeling to watch that happen. Recently I made a metal mount for the CNC because I thought it might be a better way to go. I even have a goal to make some skateboards with this.”

But why did does he call it a “mostly printed” machine?

“Everything is printed except for when you’re talking conduit, the nuts and bolts and the electronics,” he says. “I used that phrase ‘mostly printed’ when I was naming the machine. It’s there until I come up with something better!”

Zellars has recently been able to quit working for others as a mechanical engineer and do this full time. “The response has been fun so far and I like to see other people have a chance to own a machine like this,” he says.

He still marvels at how this thought even came to fruition. “You start off making something and the first time you see it move it feels like a miracle,” he says. “It makes you glad you saw it through.”

For Further Discussion
You start off making something and the first time you see it move it feels like a miracle. It makes you glad you saw it through.Ryan Zellars, Maker