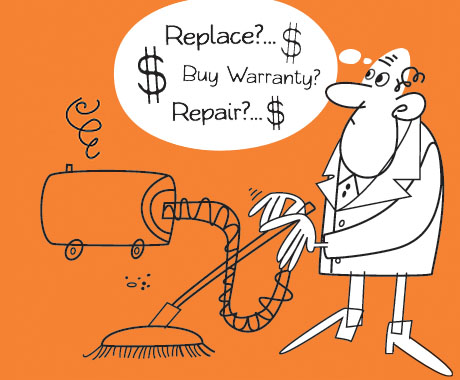 If the long rinse cycle on your dishwasher fills you with angst about the Earth's dwindling resources, rest assured, you'll soon be able to pour in the Cascade with a little less guilt. Thanks to the Department of Energy's new energy standards, by May of 2013, every new dishwasher will use no more than 307 kilowatt hours of energy a year and less than five gallons of water each cycle. In addition to feeling good about your shrinking carbon footprint, you just might save a little on your electric and water bills.

That is, if you're still using the same dishwasher in 12 years.

Unfortunately, a new dishwasher's lifespan is roughly what you get out of a dog—about nine years. Whether the vita breve can be blamed on the use of cheaper parts for competitive pricing, new electronic controls that fail after prolonged proximity to heat, or plain old planned obsolescence, there's a good chance you'll be sending your latest purchase off as landfill before the decade's out. The energy and environmental costs of manufacture, of mining materials, of production, of shipping, and finally, of disposal, are not factored into the new efficiency standards and are left largely unregulated.

"Yes, there are some things we can make that will last an incredibly long time, but there's not a business incentive to do that," says Fred Schenkelberg, a reliability engineering and management consultant. "Washing machines are classic for that. Cast iron machines from the 1950s, they still work. They were way over designed, they had one switch." Today, washing machine manufacturers know that if their products last ten years, the customers will be happy enough to buy the same brand as a replacement. "So they make it lighter and cheaper and it'll fail before the eleventh year. They're optimizing how much it costs to deliver the product versus the perceived value the customer gets."

What's good for business is not necessarily good for the customer, or for the world. So why not regulate the waste in the first place? Is there some way to pass standards for reliability and durability? Could planned obsolescence itself be legally controlled?

Durability regulations are not entirely unheard of; they just tend to address smaller scale issues. In 2012, for instance, the Consumer Product Safety Commission issued new durability standards for cribs after two infant deaths. In Europe, the Waste Electrical and Electronic Equipment Directive forces companies to responsibly recycle electronics. Cutting down the rate of product replacement could be as important for the safety of children as the construction of their beds.

"There are ways to slide this into a DOE spec," says Chris Carpenter, director of sales at ReliaSoft, reliability software and consulting company. "If there was a sticker that said 'Life data analysis indicates this product has a reliability of 99 percent with 80 percent confidence boundaries over a period of five years,' that would be awesome. I'd love to get a washing machine and see that."

In essence, this would be the Consumer Reports model. "They ask what kind of repairs consumers have, they do tear down, product testing, and so on. It's a bit of science and a bit of art," says Schenkelberg. "I don't think it would be difficult to do. The challenge is, can we standardize it enough?" Another challenge is the cost to manufacturers, and the government, of coming up with, and testing standards for, the wild variety of products available to today's human.

A simpler solution might be the government-mandated warranty. For the auto industry, the federal government already dictates how long seatbelts should last (five years or 50,000 miles) as well as any part having to do with emissions (two years or 24,000 miles). In Italy, consumers are guaranteed two years of service for any newly purchased computer.

This would benefit not only the world and the consumer, but, at least in some cases, business as well.

In the 1990s, HP was losing billions of dollars thanks to warranty returns. Those losses were dramatically reduced with a simple solution: extend the warranty. "When you increase the warranty, it increases the uncertainty of the product. You have to make more estimates, so designers tend to buy more robust parts, and the products have a larger safety margin for durability," says Schenkelberg. "It works."

For those that balk at more government intrusion, the simplest answer may be enforced transparency: letting the consumer know what is to be expected from a product. "The DoE is saying that the efficiency regulations will cause the industry to lose 13 percent of its value, 85 million dollars," says Sofie Miller, a policy analyst at George Washington University's Regulatory Studies Center who's been critical of the supposed savings to the customer that are said to come with the new dishwasher regulations. "It's interesting that those choices don't fall to consumers—you'd think they would say, 'Hey, I'll be saving money.'"

Many manufacturers already routinely test their products for reliability, and they have a good idea how long they're going to last. But forget trying to pry that information out of them. "You can ask anyone you want how long it's going to last, they won't tell you," says Schenkelberg. "The actual failure rate of a product is still a trade secret."

With the manufacturing and technology industries practically dependent on the expiration dates attached to their products, it's hard to imagine a truly sustainable world without some kind of authoritative intervention. Yet there is no one pushing for such a change. "If the true cost to society was reflected in the price, it would make the purchase prohibitively expensive," says Schenkelberg. "Somewhere there's a balance. I'm not a policy maker, but I can conceive of it happening."

Yes, there are some things we can make that will last an incredibly long time, but there's not a business incentive to do that.Fred Schenkelberg, reliability engineering and management consultant

The Benefits of a Multidisciplinary Design for Machine Builders