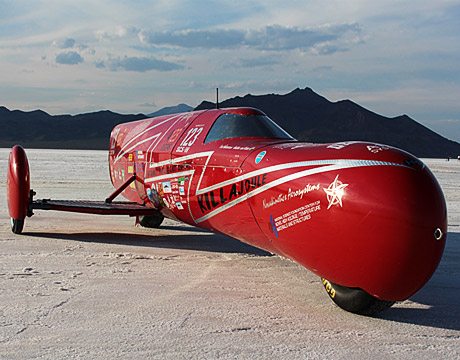 What does a woman do with some tools and a 3D printer in the garage, an engineering degree, and a dream to build things that have never been built before? She builds the world's fastest electric motorcycle.

A proud tree-hugger and speed junkie with passion for everything engineering, 35-year old Eva Hakansson, is officially the world's fastest female motorcycle rider with a dual mission in life: To show that battery-powered electric vehicles are fast and fun and that engineering is a great career choice for women.

“Engineering is arts and crafts for grownups. You just grab more advanced materials and tools. I don’t see much difference in building a doll house or motorcycle. You have the vision and idea in your head, you plan how to materialize it,” says Hakansson, who recently completed her doctorate in mechanical engineering from the University of Denver, Colorado.

“When I talk to young women thinking about engineering, I tell them that modern engineering is not about muscle power and lifting stuff. It’s more about brain power, handling complex tasks, solving problems, and project management. Women are traditionally good at that,” she says.

Her passion for all-things-mechanics led her to design and build KillaJoule, a streamliner electric motorcycle. “It took almost three years to get to 200 mph and now it has been six years,” says Hakansson, who races every year in August at the Bonneville Salt Flats in Utah. With her current land speed record of 248.700 mph (400.2 km/h), she is also the world’s fastest female motorcycle rider.

Hakansson refers to her racing as a “genetic disorder.” Her dad built and raced motorcycles in evenings and weekends. “He had a full machine shop in the basement. It wasn’t until many years later I realized how unusual, and beneficial, it was to know how to machine, weld, and to have other machine shop skills,” she says.

Coincidently, she also shares her obsession for all things fast with her husband Bill Dube. When she and her husband first raced a drag racing motorcycle, the Killacycle, which went from 0-60 mph in less than a second, they struggled with communicating to the public how fast it is. “We realized people who are interested in electric vehicles have to be blown away by performance. Acceleration is good but they want to see top speed,” she says.

They decided to therefore build a motorcycle that would be so insanely fast that nobody could ignore it and would draw attention to sustainable technologies, in the two-car garage of their home in Colorado.

The 19-ft long, 400 HP, sleek motorcycle comprises a motor, a battery, a throttle, and wheels. “The KillaJoule may look complicated, but if you think about it, it is just a giant cordless drill with wheels,” says Hakansson. It is powered by the A123Systems “NanoPhosphate” battery, which is recharged using solar power at home, or by a hybrid bio-diesel powered generator on the track.

Hakansson calls KillaJoule “eco-activism in disguise.” Speed, she believes, is a great way of showing the capabilities of battery power and via her electric motorcycle she hopes to make people that otherwise wouldn’t be interested in low-emission vehicles be aware of their potential.

According to her, the main challenge in building the vehicle has been budget and time. The battery pack and motor are sponsored but everything else is out of pocket. “It has been a very expensive hobby,” she admits, with total costs amounting to 150K. “We would have paid off our house long ago if it wasn’t for the Killajoule,” she laughs.

To save cost and time this year, she 3D printed some of the parts using the LulzBot 3D printer. “3D printing is an unbeatable way to make complex shapes. The parts we have right now are custom enclosures for electronics and aerodynamic airfoils and shapes. Parts that are very time-consuming to shape by hand.”

Do Your Math Homework

The high costs haven’t deterred her from working toward her ultimate goal of reaching a speed of 300 mph. She is already planning her next motorcycle with a goal of going 400 mph. “I hope to have it out next year for first test,” she says.

Everyone is given opportunities but what sets Hakansson apart is that she took them all. “I pursued a parallel path along with my education,” she highlights. “When you get tired of doing your math homework, you go to the garage and work a little and if you do that for six years you can be the best in the world. That’s really what got me to where I am.”

So what’s her advice for young girls with an interest in engineering who might want to follow her path? “Do your math homework and don’t be afraid to be hands-on and fixing things. There is nothing more satisfying and empowering than to see your idea materialize through work done with your own hands.”

Engineering is arts and crafts for grownups. You just grab more advanced materials and tools. I don’t see much difference in building a doll house or motorcycle.Eva Hakansson