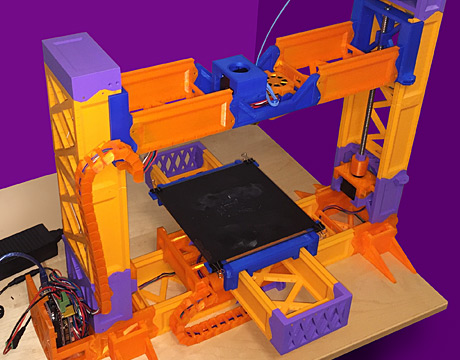 You’d think Seinfeld’s Kramer came up with this one. From the maker of a coffee table book about coffee tables comes a 3D printer made with the help of a 3D printer. Ok, Cosmo wasn’t involved but it does seem like the kind of notion that might spring from the writers of that hit show. And the creator of one of these printers, the Snappy Rep-Rap 3D Printer, didn’t mention anything about ever having an obsession with Kenny Rogers Roasters either.

Garth Minette mainly works as a professional web developer but hobbywise he’s long cast a wide net. “I like trying so many things. I picked up a CNC mill maybe 10 years ago and looked at that and thought how cool it was for playing around and making stuff,” says the Snappy Rep-Rap 3D Printer creator. “My roommate and I figured it would be interesting for doing other things with wood and metal. I made a number of 3D printers over time. But I didn’t think I’d end up doing this.”

There were a number of difficulties in creating the printer, a creation he says is more than half made from a 3D printer. “The most difficult challenge has been that these printers work by extruding plastic through a hot nozzle but if you try to print a nozzle, it’s going to melt because the same material that you’re using for the printer is what you’re squeezing through it,” says Minette, who resides in San Jose, CA.

Minette thinks in the future, people might be able to do it with a binary compound resin they squeeze through it to dissipate the heat. “With these printers, there has also been a generational loss. Each generation of the parts probably won’t be quite as good as the generation before,” he adds. “Also, if you replace the rails with smooth metal rails instead of having the printed plastic parts I have to assemble, it would remove several of the inaccuracies from my current printer.”

The maker has made about five different generations of his printer thus far and laughs when asked to describe the printer’s appearance. “A bright fluorescent-looking thing with two towers and a bridge across the middle,” he says. “For the first printer made, I had to design the parts first, assemble them, figure out what wasn’t working, and then reassemble. I worked for months on it.”

It’s designed to be snapped together and his goal was to have as few parts as possible. According to Minette, now it takes a little more than a week to design the parts and two and a half hours to assemble the 3D printer with the parts.

Beginning to end, including the price of filament, he estimates the cost of the latest iteration to be slightly less than $300. But the price of putting it together in anxiety is hard to measure.

“It’s fun but also stressful because you end up designing a part and tweaking it and it takes hours to print the part to find out if it even worked or not,” says Minette.

Learn more about the latest in 3D printing at ASME’sAM3D Conference & Expo.

For Further Discussion
I made a number of 3D printers over time. But I didn’t think I’d end up doing this.Garth Minette, maker, Snappy Rep-Rap