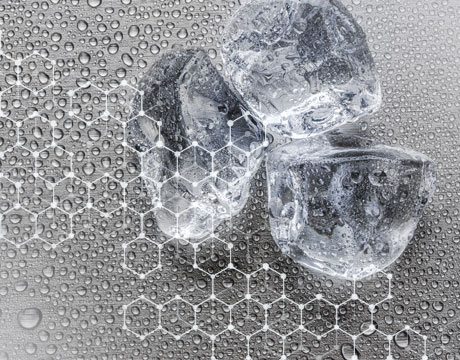 People can be nervous fliers to begin with. Even when there isn’t a cloud in the sky, there are few words that cause anxiety in some like, “Prepare for takeoff.” But add wintry conditions to the mix, add some ice, and the uneasy feeling can turn to fear. Now, a University of Houston team wants to help calm nerves, as well as increase safety, by preventing the harmful effects of ice—with the aid of magnetic forces, of all things.

“Icy conditions are a problem in nature and industry,” says Hadi Ghasemi, assistant professor of mechanical engineering at the University of Houston. “I was in Canada and doing a Ph.D. at the University of Toronto [in mechanical engineering]. It’s a serious problem over there. You couldn’t open up a door of a car sometimes with ice building up, icing on airplanes. Even your air conditioner in homes has problems. I was constantly around these issues. In my group, we looked at different approaches of nanotechnology for these problems and started to look at the problem of ice. At the same time, working with this magnetic fluid, I saw a possible solution and that’s why I started this research in my group I think around a year ago.”

For now, the creation is simply called a “magnetic slippery surface” and is made of two components. The first is magnetic tape. “This tape can be put on any surface, whether polymer, metal, et cetera.” he says. The second component is ferrofluid, which he says is basically a mixture of fluid and magnetic nanoparticles, the latter being on the order of 5 to 10 nanometers in diameter.

The ultimate idea was that this combination would make sure ice never encounters a solid to cling to.

Looking at a water drop mixing with a solid, it showed a strong bond has adhesion strength on the order of 100,000 pascals. “That led to us asking: ‘How do we avoid this interface?’” he says. “When ice builds up and has contact with a solid then it has a very solid bond and is very hard to detach,” he says. “When cold weather sits on a fluid surface, this combination [of magnetic tape and ferrofluid] doesn’t allow the ice to see the solid and it just floats on the surface.” Adhesion strength with this invention is 2 pascals, according to Ghasemi. “I was definitely surprised it worked this well, that it could go this low.” One of his goals, he says, is for it to be used in spray form.

Ghasemi has enjoyed the process, particularly working with students to bring this invention to light. “I came up with the idea but they have been critical in testing and so much more,” he says. “It’s fun to see us moving this forward.”

Considering how many airline accidents and mishaps have been ice-related over the years, he hopes this will help avoid tragedy in the future. “There has been strong enthusiasm from industry,” he says. “I’m optimistic about its future.”