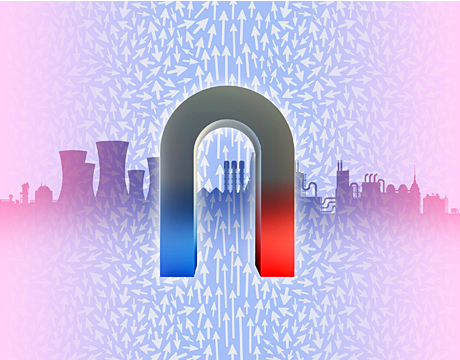 Most cooling systems remove excess heat by using water pumped through pipes. Some pipes are designed to include fins or grooves on the pipe surfaces to increase surface area for greater heat transfer, but these design features increase manufacturing costs. Water can also be pumped through the system at a faster speed to enhance heat transfer, but drawbacks include higher energy costs and a greater pressure drop in the system.

To find a better way to reduce heat in cooling systems, especially for nuclear power facilities, researchers at the Massachusetts Institute of Technology (MIT) investigated how magnetic nanofluids affect heat-transfer rates in a flowing system.

In a recent paper in the International Journal of Heat and Mass Transfer, Lin-Wen Hu, associate director of MIT’s Nuclear Reactor Laboratory, Jacopo Buongiorno, associate professor of nuclear science and engineering at MIT, Reza Azizian, postdoctoral associate at MIT, and others described a successful experiment where they demonstrated heat transfer coefficients of magnetite nanofluids were increased up to 300% when a local magnetic field was applied. These impressive results indicate this type of approach could be a highly effective, low-cost way to eliminate hotspots in cooling pipes, which can sometimes lead to system failures.

Magnetite nanofluids consist of colloidal magnetite nanoparticles suspended in a base fluid. The main interest in using nanofluids in thermal engineering systems is that their enhanced thermophysical properties (such as thermal conductivity), relative to the base fluid, can improve thermal management in the system. In a typical nanofluid, the nanoparticles are uniformly dispersed. In a solution of magnetic nanoparticles, however, the particles can be controlled using an external magnetic field, which enhances their thermal conductivity.

The experimental setup consisted of a closed-loop flow system equipped with a pump, flow meter, heat exchanger, thermocouples, and pressure transducer. The test section in the flow system was fabricated from stainless steel tube. Eleven K-type thermocouples were evenly distributed and connected to the outer wall of the tubing along the test section. A constant heat flux was provided across the test section, which was well insulated to minimize heat loss. The fluid (either de-ionized water or nanofluid) was pumped through the system and heated up by a constant heat flux as it passed through the test section. The fluid then returned to an accumulator, where a heat exchanger maintained the fluid at a constant temperature. NdFeB, grade 42 block permanent magnets were used to generate magnetic fields along the test section.

Measurements showed that the local heat transfer coefficient of magnetite nanofluids increased up to 300% when a magnetic field was applied locally. The amount of increase was found to be a function of flow rate, magnetic field strength, and gradient.

Hu indicates the magnets “attract the particles closer to the heated surface of the tube, greatly enhancing the transfer of heat from the fluid. Without the magnets in place, the low-concentration magnetite nanofluid behaves just like water, with no change in its cooling properties.”

Hu indicates this work is one of the first studies to demonstrate experimentally how heat transfer can be enhanced using a magnetite nanofluid.

“Imagine electromagnets placed at strategic locations along a pipe, which can be switched on and off when cooling needs to be increased,” says Buongiorno. For example, take any system where hotspots occur on the surface of cooling pipes. Magnets and a magnetic field could be activated on the outside the pipe next to the hotspot, to increase heat transfer at that spot. Magnetic particles suspended in cooling water could prevent hotspots in nuclear plant cooling systems, as well as electronic systems and components that experience high heat flow.

Although the initial results are very promising, Azizian cautions that much more work needs to be done to understand the exact physical mechanisms that cause improved heat transfer. “Ultimately, he says, “being able to increase localized heat transfer 300% or more will significantly reduce the capital costs of cooling system design.”

For Further Discussion
Measurements show that the local heat transfer coefficient of magnetite nanofluids increased up to 300 percent when a magnetic field was applied locally.Reza Azizian, Postdoctoral Associate, MIT