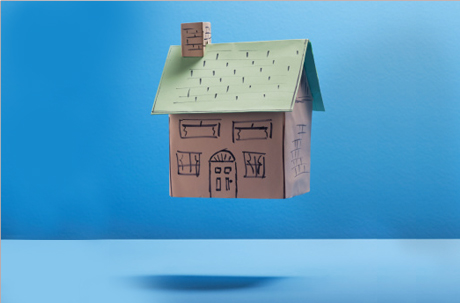 Made in Japan: Earthquake-Proof Homes

Earthquakes don't kill people. People's houses in the midst of earthquakes kill people. Look at the statistics—or the photographs—and you'll know that the vast majority of fatalities from earthquakes large or small come from buildings, or parts of buildings, falling on people.

What better way to avoid tragedy then, but by tossing a house in the air when an earthquake comes?

That's the general idea behind the levitating house developed by the Japanese company Air Danshin. The product of inventor Shoichi Sakamoto, the house sits, during more stable times, on a deflated air bag. When sensors feel a tremor, they switch on a compressor within a second. The compressor pumps air into an airbag, inflating it within a few more seconds, and ultimately lifting the entire house a good three centimeters off its supposedly earthquake-proof concrete foundation. There the structure will hover, its inhabitants able to casually go about their business, for the duration of the quake. Then the airbag deflates and the house gently settles back down.

The company built such a house on a "shake table" and equipped it with a few inhabitants, some furniture, and a couple of glasses of wine. When the mock tremors hit, in front of a rapt, hardhat-outfitted audience, the denizens hardly noticed, and not a drop of wine was spilled. The system will be added to new, otherwise typically built homes of an appropriate weight, and can be retrofitted to existing structures as well.

"It would take care of a smaller earthquake, I would think," says Deke Smith, Executive Director of the Building Seismic Safety Council and the buildingSMART alliance, part of the National Institute of Building Sciences, Washington, DC. "It would dampen some of the motions certainly. I think it would be more of a comfort thing than a minimizing damage thing. But I don't know that if you invested in it that you will have eliminated any problems with earthquakes for your structure."

Air Danshin's shake test dealt only with side-to-side motion and most earthquakes are not limited to a two-dimensional plane. Three centimeters of levitation will only protect a house from earthquakes that don't rise higher than three centimeters. Never mind the question of what would happen to a floating house hit by a tall wave of a quake. It would likely slip right off its foundation. Or, conceivably, a strong tornado might more easily carry the structure off to Oz.

Another problem is that the first tremors that would activate the system may very well be the biggest, most destructive tremors of the earthquake. The airbag, were it able to inflate, might be pushing up against the rubble of an already damaged house. "Each earthquake has its own signature," says Smith. "Some might have a big jolt in the beginning, some in the end, some in the middle." Unfortunately, our seismic sensors are not yet at the level of those animals, including dogs, that can sense earthquakes before they happen, and long before humans or their technology do so. "If they figure that out, then you'd have something," says Smith.

However, even if Air Danshin's system is only good for that rare, lateral shaking earthquake which never moves the earth higher than three centimeters, and saves its biggest jolts for its finale, 88 Japanese homes are soon to be retrofit with the airbag and its assemblage. That's 88 experiments that will provide some data after the next quake. Atapproximately three million Yen a pop (over $37,000), it's also a sizable chunk of change.

"Going out and building some of them is good," says Smith. "That's how we keep improving. It may be an idea that will spur somebody else's thoughts in some other direction. It may be a viable piece to a larger solution someday."

When the mock tremors hit, in front of a rapt, hardhat-outfitted audience, the denizens hardly noticed, and a not a drop of wine was spilled.