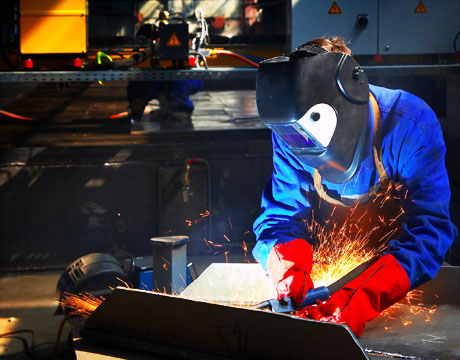 Head over to PracticalMachinist.com or any other machine shop forum and you'll find a good number of posts from mechanically minded people who dream of starting their own machine shop. A passion for tinkering and tools, and the recent affordability of CNC lathes, mills, and other machines has made such a dream seem within grasp to many.

Such dreamers can learn from those who have lived the machine shop dream. "You gotta love it, that's the main part of it," says Mike Anderson, one of the partners of Blue Chip Engineering, a shop in Ramsey, MN. "If you don't love it, forget about it."

Anderson has been working in Machine Shops since 1984. He started out sweeping floors in a shop hoping to soak up whatever knowledge and experience he could find. "From there I hopped around a little bit, depending on the job–if it offered me no more knowledge I would pick up and go to acquire the knowledge I needed." Pretty soon he was angling after, and eventually taking, his bosses' jobs.

A decade later he started his own shop with his stepfather, an engineer who'd worked in manufacturing for 18 years. "We just jumped in with both feet, not even having a job–a week later we had enough work to sustain two people," says Anderson. "But customers don't pay you for 90 days. It was not fun working for free for that long."

Blue Chip was able to turn around prototypes and products faster than bigger shops, often hobbled by paper work. "The service end of it is huge," says Anderson, "If you can make them happier faster, most of the time you'll be rewarded with repeat work." Over the years, Anderson and company gradually built up their tool kit. "It's probably the only way to go–you don't want to get so far under debt. Typically someone will start a machine shop, get a big job, get all the equipment and then the client will pull out–then they're stuck with all the stuff. If you grow gradually, you can handle the ups and downs better."

And Blue Chip has seen its share of ups and downs. Though the company eventually expanded to five employees, it is now down to three. Part of that is due to jobs wandering overseas; the rest may just be the economy and hard luck for small businesses. "It's really tough out there now," says Anderson. "Really tough. For the small guy, unless you have somebody with deep pockets, I don't recommend it." Nonetheless, "If you don't mind not sleeping for a while and you've got a good work ethic, you can make it."

In fact, Blue Chip is about to wed with a deep-pocketed somebody. "We're being bought out presently, trying to do the smart thing, being enveloped into one of our larger customers," says Anderson. "It's better than liquidating, or just hanging on until you're so broke you can't see straight." But the small team of machinists will be able to maintain their identity to some degree, as the larger company will keep them together as a separate "short run, get it done kinda shop."

With times as tough as all that, amateur tinkerers might best be advised to keep their tinkering amateur–unless machining is something they simply have to do. If you have to ask, then the answer is probably "no."

You gotta love it, that's the main part of it. If you don't love it, forget about it."Mike Anderson, part owner, Blue Chip Engineering