Losing Weight to Get to Mars

Losing Weight to Get to Mars 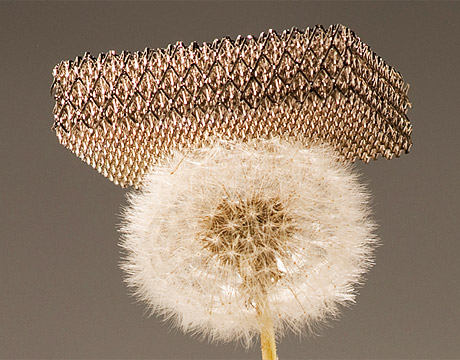 A new ultralight material has one aerospace company pondering applications in the manufacturing of airliners, primarily within the plane, that could greatly reduce the weight of an aircraft. “The lightest metal ever,” recently acknowledged by Boeing and developed by HRL Laboratories, is made from a microlattice core that is 99.99% air and has absorption properties that enable it to spring back into shape.

Developers say it has the potential to be used within an airplane for flooring and structural uses within a fuselage. Dr. Tobias Schaedler, HRL senior scientist, says ultralight cores could be used for sandwich panels, overhead bins or similar pieces. With the potential to greatly reduce the weight of an aircraft, airlines could save millions of dollars in fuel costs.

HRL and research partners the University of California at Irvine and the California Institute of Technology describe the material as a 3D open cellular polymer structure and illustrate the material by placing a cube on top of a germinating dandelion. The dandelion supports the tiny cube. Another video shows the cube compressing and returning to its original shape, something like an elastomer that cushions for shock.

It is a microlattice of hollow tubes of nickel, says Schaedler, with a density of 0.9 milligrams per cubic centimeter. That is less than the density of water. “It’s much thinner than a human hair,” more than 1,000 times thinner, says Schaedler.

Schaedler says research first began with interest from DARPA, which was interested in creating white space materials using architecture as another dimension in materials design. “Before we were always using solid materials,” says Schaedler. “But you can make lightweight [materials] using porosity. When we introduced porosity to materials, we achieved some properties not seen before. That’s where the lattice comes in. It has better mechanical properties at lower density.”

Fabricating and building the lattice takes place over several steps. First, a mask is applied to a reservoir holding liquid resin. “We then expose ultraviolet light through holes in the mask and at different angles,” says Schaedler. When the light hits the resin, it forms polymer fibers and the fibers follow the path of the light. The multiple beams create multiple interconnected fibers.

The remaining resin is then washed away, leaving the polymer fibers. The fibers are then coated with a very thin layer of nickel after which the fibers are dissolved. What remains is the metal lattice. Size and dimension can be altered by varying the size of the holes in the mask through which the ultraviolet light travels.

“This could help Boeing save a lot of weight and make airplanes more fuel efficient,” said Boeing research scientist Sophia Wang in a video announcing the material. HRL also thinks it has potential for air-cooling devices in computers and electrodes in lithium ion batteries.

HRL, which is partly owned by Boeing and General Motors, is continuing its work with the National Aeronautic and Space Administration. Earlier this year, it announced it would supply NASA with ultralight materials through NASA’s Game Changing Development Program. The goal is to reduce the mass of spacecraft for deep space exploration by 40%, a necessary step for NASA’s plans to journey to Mars.

“We’d like the microlattice core to replace honeycombs,” says Schaedler, who will head the new program. The researchers want to develop lighter and stronger cores with innovative struss architectures to be combined with carbon fiber composite facesheets, according to HRL.

The HRL approach combines ultra-stiff and ultra-strong materials (such as nanocrystalline metals) that provide higher strength than conventional materials with highly optimized truss architectures that enable unprecedented degrees of freedom to tailor the mechanical performance, according to the laboratory. “We’re building on our breakthrough invention of ultralight metallic lattices and will mature the technology to apply to the next generation of space vehicles,” stated Schaedler.

In 2011, when HRL researchers published their findings in Science, Dr. Bill Carter, head of HRL’s Architected Materials Group, likened the microlattice to larger buildings such as the Eiffel Tower. “Modern buildings, exemplified by the Eiffel Tower or the Golden Gate Bridge, are incredibly light and weight-efficient by virtue of their architectures.We are revolutionizing lightweight materials by bringing this concept to the materials level and designing their architectures at the nano and micro scales.”

“The ultralight paper was published in 2011 and that started a competition,” says Schaedler. “We can’t claim the lattice material alone.” Among others, he says researchers at Lawrence Livermore National Laboratory are working with similar nickel lattices, and researchers in China are working with carbon for even lighter materials.

HRL scientists are also exploiting the microlattice to form ultrathin sandwich structures that could be used as a platform for unmanned micro aerial vehicles. Sandwich structures improve the performance of weight-sensitive vehicles like airplanes and helicopters because they are lighter than other materials,” said Dr. Christopher Roper, HRL senior research staff engineer in announcing the lab’s success. Roper co-authored the paper “Enabling Ultra-Lightweight Structures: Microsandwich Structures with Microlattice Cores,” published in APL Materials.

Roper said the low densities are impossible with traditional sandwich structure fabrication techniques because the weight of the adhesive is greater than the weight of the facesheet and core it holds together. Researchers used the technique to produce the photopolymer waveguide microlattice material, allowing the microlattice core to perform as both adhesive and the core.

Researchers think microsandwich structures could eventually be used in the wings of insect-like robots or similar unmanned aerial craft. Such devices could be used to inspect hard-to-reach infrastructure or fit through difficult spaces to locate survivors in the event of a natural disaster.

For Further Discussion
We are revolutionizing lightweight materials by bringing this concept to the materials level and designing their architectures at the nano and micro scales.Dr. Tobias Schaedler, HRL Laboratories