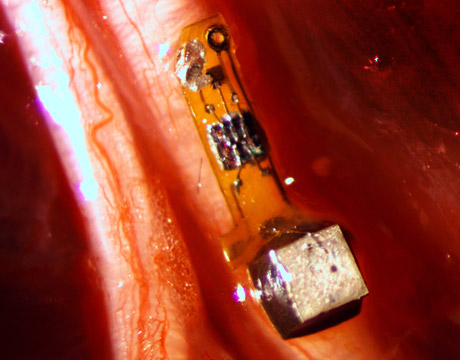 In the spring of 2013, inspiration came to Michel Maharbiz while he stood in a parking lot. Why not use ultrasound to power implantable devices, record and communicate brain activity, and, potentially, to stimulate nerves within the human body?

By that summer, his team at the University of California Berkeley had published a paper depicting, mathematically, how the tiny devices would operate. By August 2016, they’d built the dust-sized wireless sensors, implanted them in rats’ muscles and peripheral nerves, and published their “brain dust” research findings in the journal Neuron.

Brain implants are used for those with Parkinson’s disease, epilepsy, or clinical depression. They’re also being studied to help those who have suffered a stroke or head injury. Implants within the spinal cord to stimulate nerves help with chronic pain and for issues like sleep apnea. Other implants stimulate the muscles to allow them to operate.

In the future, a patient with a neural implant may be able to use a prosthetic limb in the ways humans do their natural limbs: without thinking consciously about how they want the arm or leg to move.

Before his sudden inspiration, Maharbiz had been toying with a problem that has long dogged neural technology researchers. Conventional implants used to record brain activity or stimulate nerves are presently comprised of long, thin wires topped with electrodes and connected at sites within and outside the body. The wired implants literally emanate from the patient, says Maharbiz, an associate professor of electrical engineering and computer sciences at the University of California Berkeley.

What’s more, they quit functioning after about five or six years, with some failing much earlier than that due to the effects of their environment.

“This is one of the big challenges of neural technology: how to build an implant that will last for a long time in the body,” he says. “The cells start ripping apart the implant and wires are rubbing on areas inside the body and you may get a fibrous mass that grows around the implant.”

The researchers call their devices neural dust. They’re about the size of a grain of sand and are comprised of a piezoelectric crystal that converts ultrasound vibrations from outside the body into electricity to power a tiny transistor that rests on a part of the brain, a nerve, or muscle fiber.

The sensors are unique not only in their size, but also because ultrasound is used both to power the device and communicate measurements. Ultrasound technology is already widely used in the medical field, and ultrasound vibrations can penetrate nearly anywhere in the body, unlike radio waves, Maharbiz says.

“We can make these tiny, free-floating implants for communicating and recording brain activity and we’re already doing nerve stimulation with them,” he adds. “And we can implant them into people and have it last for 20 years or more.”

But the duties of the neural dust of the future may be much broader in scope, says neuroscience graduate student Ryan Neely, who worked on the project.

“The original goal of the neural dust project was to imagine the next generation of brain-machine interfaces, and to make it a viable clinical technology,” Nelly says. “If a paraplegic wants to control a computer or a robotic arm, you would just implant this electrode in the brain and it would last essentially a lifetime.”

But the devices open the door to communicating all kinds of information about what’s happening in a patient’s body, Maharbiz says.

“Having access to in-body telemetry has never been possible because there has been no way to put something super-tiny super-deep. But now I can take a speck of nothing and park it next to a nerve or organ, your GI tract, or a muscle, and read out the data,” he says.

Implants take about a decade to become commercialized and receive FDA approval and Maharbiz expects the neural dust to be no different.

Once approved, the dust will become vital to many patients’ lives. Certainly not the kind of dust they’ll want to sweep under the rug.