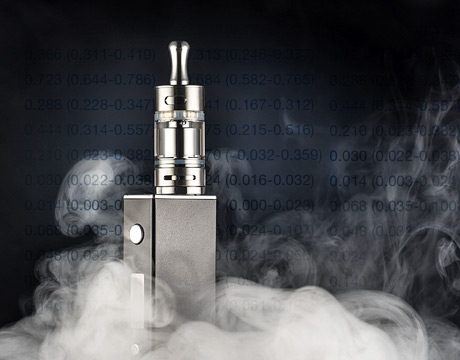 Lighting Up the Statistics

Prof. Risa Robinson, head of the mechanical engineering program at the school and director of the Respiratory Technologies Laboratory, has been studying e-cigarettes for years, with her initial research including article deposition in the respiratory tract. “There are a decent amount of potential factors with e-cigarettes, but two that aren’t considered enough are the coiling and that the flavoring might make people use e-cigarettes more often. An e-cigarette works through a heating coil and in a liquid format there is the nicotine. They take a puff and bring liquid into an atomization chamber and a chamber has a heating coil and that process ‘aerosolizes’ the liquid into a small droplet. The droplet is suspended in air. And that’s what is inhaled.”

One of the monitors for their analysis is an orifice plate with a technique to measure flow rate. “The plate is a flow channel that has an abrupt constriction in the flow,” she says. “Because of that, it has a pressure drop and can derive empirically a relationship between flowing rate and that measure and that pressure drop. If you have a couple of pressure sensors in there you can measure the pressure drop across that orifice plate and have to calibrate it to associate with the actual pressure drop. We can essentially measure flow rate. There is a data logger so we know how many puffs, how long a puff lasted, and when they took the puff. With integral calculus, we can figure out total cumulative amount inhaled.”

They are looking at the impact of cigarette design itself on emissions, some having multiple coils, for example. “They also have different aspects to their atomizer,” she says. “We want to know how much nicotine they are getting in a week compared to regular, conventional cigarettes. If they use this one flavor for a couple of weeks, does their usage increase or decrease? We’re looking at emissions and what’s in the emissions.”

They even can do a mechanical puffing of the cigarette and can see through this what kind of carcinogens and toxins are present, she says.

Their hypotheses when it comes to flavor? “One study’s conclusion was that flavor will impact usage behavior from cumulative exposure, another study’s is that certain flavors will create more toxic emissions than others,“ she says.

“Just because it may not be harmful to use this flavoring in a cookie doesn’t mean it works the same way for e-cigarettes. It’s going into your body in a different way,” she says. Some studies have shown when running flavorings over coils that there are toxins produced that are harmful for human cells. “We don’t have information now on which flavorings are more harmful,” she says.

Robinson has been pushed by a search for truth. “What people sometimes don’t think about is they can possibly end up with huge potential problems down the road by not considering what’s going in their body,” she says. “It’s our job to search for answers to sometimes tough questions.”

For Further Discussion
We want to know how much nicotine they are getting in a week compared to regular, conventional cigarettes. If they use this one flavor for a couple of weeks, does their usage increase or decrease?Prof. Risa Robinson, Rochester Institute of Technology