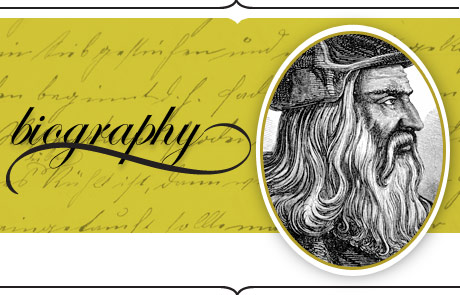 Leonardo Da Vinci (1452-1519) is best known as the artist who created the "Mona Lisa" and "The Last Supper," but he was also a self-taught engineer. This open-minded, inquisitive, boundless, practical dreamer was driven to learn and had a restless mind.

Da Vinci lived in Italy for 67 years during the mid-1400s. In a time far before electricity, when water was used as power, and 100 years before Galileo had worked out measuring time, Da Vinci was an engineer and proficient inventor of both working and theoretical inventions. His artistic talents enabled him to record his mechanical ideas with enough clarity that blueprints for working models could be created, allowing humankind to continue celebrating his achievements in modern days.

Da Vinci wanted to create new machines for a new world. He wanted to create better conditions for people as well as animals. He applied his drawing and perspective skills to a career that earned him higher pay than an artist, working as an engineer for many years.

There was a need for engineers in Milan in the 1480s to design military fortifications because the region was at war, so Da Vinci wrote a proposal to Duke Sforza which could now safely be deemed the world's best cover letter, detailing his capabilities and applying for an engineering position.

"In case of a siege, I know how to dry up the water of the moats and how to construct an infinite number of bridges, covered ways, scaling ladders, and other machines for this type of enterprise," he wrote some 600 years ago.

He got the job.

At age 30, he first explored his engineering talents and went on to work as a military engineer for 17 years in Milan. He studied and designed war instruments such as tanks, catapults, submarines, machine guns, and other weapons. He also focused on mechanics of levers, gears, cranes, hydraulics, ball bearings, bicycles, and flying machines. He displayed civil engineering talents as well, with geometry studies and architectural designs of domed churches, fortresses, and canals. Among many other designs, in 1495, he detailed plans for a three-wheeled, wind-up, self-moving "auto-mobile" that has also been considered the first "robot."

Da Vinci was the first "systems engineer," creating a new attitude about understanding how machines worked. According to curators at the Boston Museum of Science, "He reasoned that by understanding how each separate machine part worked, he could modify them and combine them in different ways to improve existing machines or create inventions no one had ever seen before." He wrote the first systematic explanations of how machines work and how the elements of machines can be combined.

He wrote daily in his notebooks in Italian, using "mercantile script" mirror writing, from right to left, not intended for others. He didn't write linearly, in complete thoughts, or with logical progressions, but observationally. His journals contain drawings and words that describe concepts, ideas, functions, connections.

He wrote thousands of pages comprising 30 scientific journals. The most important is now called the Codex Leicester, his only known continuous and completed writing covering the nature of water, its movement, laws of currents, and how they relate to air, motion, and the stars.

The Codex Leicester is also the last publicly owned Da Vinci notebook, currently held by Bill Gates, who purchased it for $30 million. It has been digitized for the world to see, and the actual notebook is exhibited in the Seattle Art Museum with computer programs that display the reverse mirror writing and explain how the text on the pages connect. All other notebooks are owned and on display by libraries or museums throughout the world.

The smallest of all the notebooks, with three sheets of notes on geometry, weights, mechanics, and hydraulic machines, is Codex Forester, which dates from 1490-1493 and is now on display in London at the Victoria and Albert Museum. Two books from 1491-1505 contain almost 200 pages about mechanics and a manual for a foundry system for creating an immense horse.

Most of his designs were never published, financed, or built. Some of his futuristic ideas couldn't have been built at the time and took hundreds of years to be re-invented. Even though he did not greatly affect the technology at the time, his theoretical treatments and complete documentation were significant, greatly impacting the future. Da Vinci remains the quintessential example of the utmost in human capability.

He wrote daily in his notebooks in Italian, using “mercantile script” mirror writing, from right to left, not intended for others.