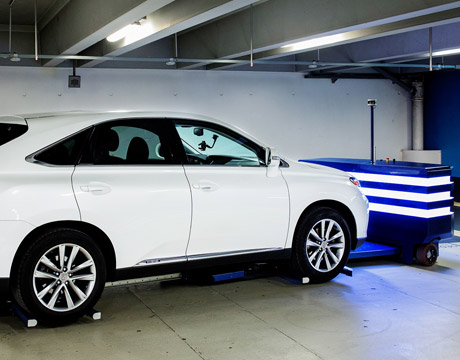 Leave the Parking to Robots

Parking a car in a large surface lot or multi-story garage is a mind-numbing chore. Now, a Paris-based robotics company looks to take the keys from human drivers and put them in the hands of an automated valet parking system.

A successful six-month trial at Charles de Gaulle Airport has Stanley Robotics taking its system, called Stan, on the road to the airport in Lyon, France’s second largest city.

Clément Boussard was in charge of parking self-driving cars as a researcher at Laboratory for Vehicle-Infrastructure-Driver Interactions at the French Institute of Science and Technology in Transport, Development, and Networks in Paris when he founded Stanley Robotics with two others in 2015. Using parking data from de Gaulle, the company tested the system using six cabins and about 30 parking spaces from February to July of this year.

The system enables airport travelers to drop off cars in a cabin near their terminal, grab their luggage, punch in their return flight info, and then take off. Stan carries each car to a parking space and brings it back on the customer's return through management software based on the same concepts used in factory automation to move pallets around. (In spite of being a valet parking system, there’s actually no need to leave behind the keys.)

During the prototype testing, the team struggled through design failures. One important adjustment involved the platform that locks the wheels and lifts the vehicle. It took a few iterations to discover the right height for sliding under the front of any car.

The parking test at de Gaulle Airport was mostly a test bed for the user experience. The team at Stanley Robotics, which was named in homage to Stanley Kubrick who created a homicidally perfectionist computer in 2001: A Space Odyssey, was shocked to discover that the leisure-loving French couldn’t care less about the robot behind the curtain.

“We had videos, brochures, and stickers to explain it, but in fact people didn’t care,” Boussard said. “They were just really happy to come back and see, ‘Wow, my car is here.’ It was the car parking equivalent of an automatic coffee machine, Boussard explained. “When you ask for your coffee, you have a plastic cup coming down, then you have coffee going in, but you don’t know what is happening inside the machine.”

The technology is a win-win, for both travelers and airports. Since the system knows each user’s itinerary, cars can be double-parked until needed, increasing the lot’s capacity by 50 percent in an already lucrative sector of the air travel industry.

A new version of the system will launch at Lyon–Saint-Exupéry Airport in 2018 with a plan to increase capacity to handle 10,000 spaces with 100 cabins. Building on $4 million (€3.6 million) in venture capital it received last spring, the company is raising more money to expand into airports in Asia and the U.S.

While technologists predict that soon cars will be able to drop off passengers and park themselves automatically, Stan will be able to handle the chore for cars where the driver is still very human.

For Further Discussion
We had videos, brochures, and stickers to explain it, but in fact people didn’t care. They were just really happy to come back and see, 'Wow, my car is here.' Clément Boussard, Stanley Robotics