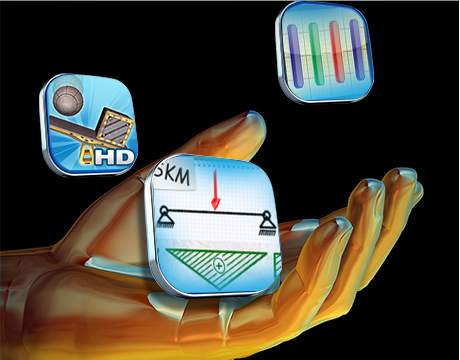 "Mobile devices are becoming the biggest gaming consoles now and the platform is great to engineer on," says Thomas Heerman, director of product management in the Autodesk Consumer Group, San Rafael, CA. Engineers looking to play, and game players looking to put on their engineering cap, can turn to a host of new, mobile games. For some of them, you'll need a bit of engineering knowledge to play. For others you won't need much in the way of engineering education to start playing, but you just may walk away with some.

1) Schnittkraftmeister is a race against the clock for the structural engineer. Unlike the other games here, if you don't have some formal training, you're not going to have too much fun—or get too far. Each screen has an internal force diagram with three possible solutions, all pleasantly "sketched" on a virtual graph paper notebook.

The game designers recognized a trend toward unquestioning overreliance on computer structural analysis. "We try to train students in identification of "wrong" results or interpretation of these," says Juergen Zechner, a professor at the Institute for Structural Analysis at the Graz University of Technology and one of the game's designers. "Usually these wrong results are introduced because the underlying model—the simplification of reality done by the engineer or student is simply wrong or makes wrong assumptions. Mistakes in modeling might get uncovered by the software, but one needs to learn how to identify them."

As the user progresses from screen to screen the problems become more complicated and the time allotted to solve them shorter. Any engineers hoping to test themselves can get to it directly—the app is a free one.

2) For the most fun—and, perhaps, the least learning—check out Autodesk's Tinkerbox. With it, players can use chains ropes and suspension springs, compressed springs, motors, scissors, fans, platforms, conveyor belts, bolts, balls, boxes, and buttons to create elaborate Rube Goldberg-esque contraptions. Or the same set of tools can be used to solve gradated puzzles.

Though the game could conceivably make a user more accustomed to the kind of thinking an engineer engages in to solve various problems, it's really more fun than educational. "The biggest learning users can take from the game is the creative problem-solving aspect. They need to find ways to approach the problem, and use different tools to solve it," says Heerman.

Once users have progressed to the more complex puzzles and properly honed their virtual contraption making skills, they can create their own puzzles and share them with other players.

3) Fourbar is a game with a specific focus that you might guess from its name. "The app is based entirely around the four-bar linkage, which is something that every mechanical engineer learns about in college," says Kevin Loewke, co-founder and CEO of Cellogy and creator of the game.

Four-bars linkages are one of the most common mechanical elements used by engineers, and can be found in cars, bikes, tools, industrial equipment, and all sorts of robotics. The game explores various four-bar situations with 48 levels of puzzles. Each screen features four bars connected with rotational joints. Players can move the base and shorten or lengthen the bars in an effort to get four bars to swing across stars that appear here and there.

"This game might be helpful for those students just learning about linkages, as it allows them to easily manipulate the geometry of the four-bar and observe the effects in real-time," says Loewke. Though those effects might seem counterintuitive at first—that's the nature of a four-bar linkage—even non-engineers will quickly be able to solve the first puzzles. Still, Fourbar "obviously appeals mostly to engineers or people who like to tinker with mechanical things," says Loewke.

There are three groups of complexity. In the first group, no restrictions are placed on the four-bar configuration or its path. In the second, one or both ends of the four-bar are "grounded", or locked in place, forcing the user to rely more on stretching the links. In the third group, obstacles are placed in the path of the bar and must be avoided, requiring the user to be more precise in their geometry configurations.

Should players master the virtual fourbar, perhaps they'll be ready to enter the real world of engineering and build us all a better windshield wiper.

The biggest learning users can take from the game is the creative problem-solving aspect.Thomas Heerman, Autodesk Consumer Group