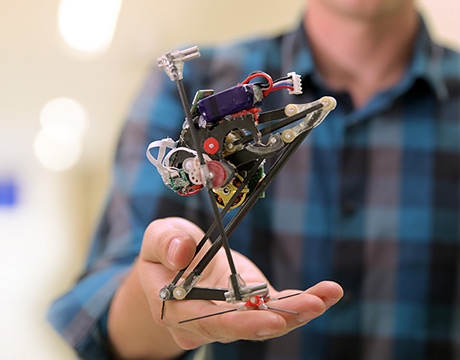 The Salto robot can leap into the air and then spring off a wall, or perform multiple vertical jumps in a row. Image: University of California at Berkeley

The galago is a critter of astonishing bounceablity. Weighing in at less than five pounds, the wide-eyed mammal can easily clear six feet. And it’s not left panting on the ground, sapped of energy, after such a leap. It can immediately leap again and again.

But the animal’s muscles are too puny to account for all that power. “The explanation is that during its crouch motion the animal is actually able to store additional energy in the muscle-tendon complex of its leg,” says Mark Plecnik, a researcher at University of California at Berkeley’s Biomimetic Millisystems Lab. “It’s the rapid un-tensioning of the muscle/tendon complex that is allowing the animal to bridge this power gap.”

To show just how such a power modulation might be used to obtain the vertical jumping agility of a galago, Plecnik and his co-researchers decided to build a robot. The result is “Salto,” a single-footed, quarter-pound automaton capable of repeated leaps that approach the heights of the flesh and blood original. It can bound off the ground then bound again off a wall or tree with the dexterity of YouTube’s greatest parkour stars. The speed and height of its jumps (roughly five and a half feet every second), make it the most vertically agile robot on the planet.

This is very different from the extreme vertical jumping ability of fleas and other insects. They essentially wind themselves up and then spring into the air willy nilly. They land willy nilly too, and have to right themselves before they can jump again. Salto stays oriented throughout its jump and is capable of making another just as soon as it hits a second surface. “Vertical jumping agility is the multiplication of how high your robot or animal jumps multiplied by how frequently it jumps. This is the major metric we were trying to obtain,” explains Plecnik. “There are higher jumping robots, and higher jumping animals, and ours is not the most frequent jumper. But it is the best combination of the two.”

To hit this high note, Salto puts energy into the elasticity of its spring as it crouches. Then, when it extends its leg for the jump, that energy is rapidly dumped back into the system.

Though eyeless, unipedal, and considerably less furry, Salto does bear a physical resemblance to the animal. But this was never the plan: “Salto was designed computationally using an algorithm we wrote that finds locomotive linkages by solving very large sets of equations,” says Plecnik. “That’s why it was surprising that Salto’s leg looked like the galago’s leg, because the algorithm found the design rather than us mimicking the animal's dimensions.” As the design was refined over time mother nature and the mother of invention proved to be of like minds.

“When you’re solving a design problem, you often have to formulate requirements, and most people focus on these design requirements: how do we do it,” says Plecnik. “But really characteristic of all design problems is figuring out the right set of requirements.” Plecnik and his team were pretty far along with their design, having created a powerful leg, when they realized they had left out an essential ingredient. “The one requirement that sort of got us, was having the robot jump in the air without spinning uncontrollably,” he says.

At that time Salto had six link inertias, which, the researchers thought, were light enough to be of no consequence. It also had a small tail mechanism meant to keep the bot oriented in the air. “But at the rate it was spinning, it was totally out of the question that the tail was going to function,” says Plecnik. The solution was balancing angular momentum so that the ground's force pointed through the robot's center of mass as the leg extended. “That process ended up requiring us to add two more links to the mechanism, which is a high cost to ask for because we were trying to make as simple and lightweight a robot as possible.”

Those extra links also had the effect of making the robot look even more like a galago’s leg.

The curious similarity of beast and bot may fuel future research. “How important is this dynamic balancing of the animal’s leg? How well balanced is the animal’s mechanism? We don’t really know the answer to that. Maybe it’s not well balanced at all because the animal has many redundant muscles. Maybe it just leans forward or backward to compensate. Or maybe that’s too much neural effort to make in a rapid jump that’s happening in milliseconds,” says Plecnik. Salto’s agility and abilities mean it could someday be used to hop over rough, irregular terrain, maybe after an earthquake or some other disaster. But while others pursue applications, Plecnik will be tinkering with his linkage design algorithms, he says, “to create more robots with novel locomotive capabilities.”

For Further Discussion
It’s interesting how much our leg looks like a galago’s leg without it having ever been a design criteria.Prof. Mark Plecnik, University of California at Berkeley