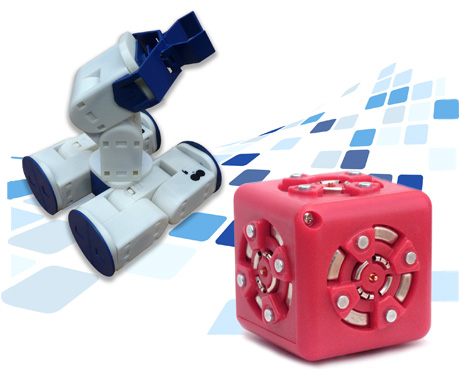 What do R2-D2 from Star Wars, Adam from Real Steel, Bumblebee from Transformers, and Wall-E from the popular Pixar film have in common? Yes, they are all robots that kids love, and some also dream of building. However, building a robot with metal sheets and all the cumbersome wiring and programming isn't easy for kids, unless there are robot construction kits that can pare it down to just a few simple steps.

The immensely popular LEGO Mindstorms and VEX Robotics kits have also been engaging kids in robot construction for many years, but the modular robotic kits differ from their LEGO counterparts in the sense that they have fewer parts that can be easily and quickly snapped together to build a robot without any wires or programming knowledge. They make building robots as simple as building circuits using snap circuit-boards.

"Robotics plays a great role in STEM education as it is something kids can see, feel, touch, control, and imagine," says Graham Ryland, president, Barobo, Inc. Barobo's flagship product, the "Mobot," is a modular robot, designed for transformative K-12 STEM education. The company's SnapConnector technology allows kids to create robots quickly. Each module is independently mobile and when kids connect it with four to five other modules, they can create different types of robots such as a gorilla that walks or a four-legged walking dog (see video).

Last year, Barobo participated in a state fair and Ryland recollects having a constant crowd of excited kids at their booth. "You just hand them the modules and it takes them 30 seconds to figure out orientation, control, and degrees of freedom even if they haven't worked with robots earlier. They see instant response and get engaged," he says.

Founded in 2010 as a commercial spinoff of technology developed in the Integration Engineering Laboratory at the University of California, Davis, and funded by the National Science Foundation (NSF), Barobo collaborates with the C-STEM center that has been doing a lot of research on how robots can be used for teaching math classes. It now has over 200 modules in over 25 schools in the Sacramento area in California. "We sell primarily to high schools but we have many robots in middle schools as well as universities," informs Ryland.

"Robots make math make sense," says Ryland. "When a student is working on a word problem in mathematics, it is very hard for them to be passionate about solving it without any context. What robotics does is it gives context to the word problem," he explains, adding that robots are the most direct application of "doing math." For instance, a student could enter number of degrees, direction, and speed on the control panel to drive a robot and then try out a math problem in reality where one robot can run fast catching up with another robot that drives slow, both keeping the same distance. "That is an algebra problem solved in reality!" he says.

Designed to help kids understand complex systems are the "Cubelets," magnetic blocks that can be snapped together to make a wide variety of robots with no programming and no wires. Kids can build robots that drive around, respond to light, sound, and temperature, and have life-like behavior. The robots' behavior depends entirely on how you assemble the Cubelets.

Cubelets are the work of Modular Robotics, a start-up that was spun off from Carnegie Mellon University, with initial funding from private endowments and the NSF and that recently received $3 million in venture capital funding from Foundry Group and Bullet Time Ventures.

There are 20 different Cubelets and inside every module is a tiny computer. When you put them together it becomes a massive parallel system and then you start seeing emerging behavior or robots (see video). "We have seen tools that allow kids to model something like this but they are screen-based tools or video games. That makes it hard for them to connect it with something in real world. When they snap the cubes and understand what each does and see life-like behavior emerging, that makes it easy for them to relate back to real world," says Eric Schweikardt, CEO & design director, Modular Robotics.

According to Schweikardt, besides STEM learning, Cubulets are a great tool for kids to understand the complex systems in the world and to demonstrate that there are lots of ways to solve a problem. "The future of engineering depends on understanding complexity and emerging behavior and these are areas of education that are grossly underrepresented. They are not part of any education curriculum," he says.

Kids have been playing with Cubelets in science centers and children's museums, including the Boston Museum of Science and the Carnegie Science Center in Pittsburgh. Essentially a toy company that focuses on consumers and infoscience, Modular Robotics is considering formal education as a long-term plan. Meanwhile, it will continue selling them to parents and working with museums and science centers.

Priced at approximately $292 per Mobot bundle and $520 for a standard pack of Cubelets, these kits might seem a bit pricey for parents considering them for their kids. However, spending a similar amount of money on tech toys is fairly common, and with robotics being a cornerstone of STEM learning, these modular robotic kits might be an investment worth a lifetime of learning.

Robotics plays a great role in STEM education as it is something kids can see, feel, touch, control, and imagine.Graham Ryland, president, Barobo, Inc.