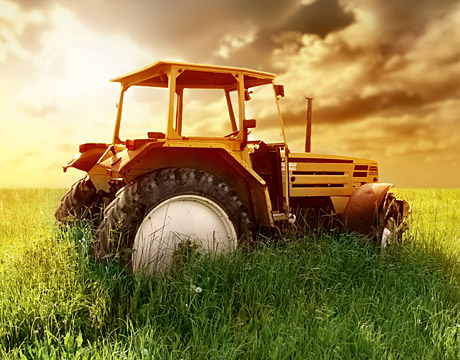 One critical engineering difference between farm tractors and over-the-road "semi" tractors is their speed. Eighteen-wheelers zip along open roads at 65 mph or better. A farm tractor's usual plowing speed is about 4 mph, so keeping farm tractors cool is a major task.

This big speed differential has big heat-transfer implications. Very little air flows naturally under the hood. Farm tractor designers have always had cooling problems. Those are compounded by farm tractors' comparatively small engine compartments. Large, turbocharged diesel farm tractors have up to five under-hood cooling systems: one each for the engine, the fuel, the transmission oil, the air compressor, and the cabin air conditioning. New emissions regulations from the U.S. Environmental Protection Agency (EPA) have created additional cooling challenges.

Farm tractors rely almost entirely on one big fan to drive off all that waste heat. Making sure it works efficiently has always been a tedious task. The under-hood components often were juggled to optimize airflows against the fan’s appetites for engine power and fuel. That forced manufacturer Case New Holland (CNH), Burr Ridge, IL, to build and test a prototype for each arrangement. There was never enough time or budget to optimize a design.

Until very recently, engineers at CNH used hand and spreadsheet calculations. Those were verified, to one degree or another, by physical prototypes. And that was a problem.

CNH solved the problem by automating heat-transfer calculations with computational fluid dynamics (CFD) software supplied by Fluent, Inc., Lebanon, NH. CNH engineers and managers in Burr Ridge say the Fluent package was chosen because its software accurately simulated extremely complicated cooling packages while keeping computational requirements to reasonable levels. Fluent is a unit of ANSYS, Inc., Canonsburg, PA, a developer of engineering simulation and analysis software. CNH is a unit of CNH Global N.V. in The Netherlands, and is majority owned by Fiat Industrial S.p.A. in Italy.

CNH engineers now model and simulate the flow of air from the fan through the engine compartment and through the heat exchangers used in each of the modules. In the company's new Magnum tractors, the fan’s power consumption was significantly reduced. CFD made it possible to evaluate enough potential designs, and several alternatives, to optimize the design. Also reduced were the costs of building and testing prototypes. Fluent’s software predicted the performance of the proposed designs.

This was the big change. The old calculations had been verified only in a lab and not under the hood, where the fans behave differently. CNH's old methods also were unable to take into account the geometry of the under-hood compartment and didn't show how the air actually flowed, and that uncertainty made the prototypes necessary.

CFD inputs included the geometry of the tractors' diesel engines, fans, heat exchangers and other components, and engine compartment sheet metal. The CFD-driven modifications on the Magnums included improved fan designs that draw much less power as well as new oil coolers.

Coolant temperatures predicted by the simulation correlated well with measured temperatures. The CFD models had 5 million to 10 million elements and it took 24 to 48hours to run the simulation. These results were considered excellent because they approximated the variability of physical testing. The use of simulation in the design process made it possible to bring the product to market substantially faster than the previous generation of products.

CFD made it possible to evaluate enough potential designs, and several alternatives, to optimize the design.