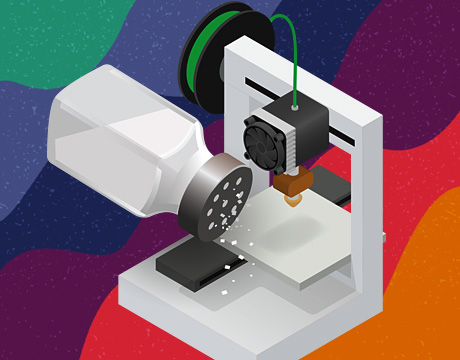 “Pass the salt” is a phrase you hear at the dinner table, but not when it comes to 3D printing. That could change as a team of researchers at Wilkes University uses the mineral to make medical scaffolds and more.

“You don’t think of salt, but it can mix well with 3D printing to give scaffolds improvement in material porosity,” says Xiaoming Mu, assistant professor in mechanical engineering at Wilkes University. “It’s ideal for biomedical because you can culture cells and beyond. We had originally worked through a few technologies, but this had the strength we were looking for.”

His team originally started looking at substances that were coarser than salt, but they ultimately saw that salt could be used after it went through a special leaching process, in which salt particles are added to a polymer resin. The particles contact each other and, in the small space between each particle, there is fusing.

“Later on, shining light and curing the polymer is involved, with water ultimately dissolving,” Mu says. “We need salt to connect so water can go inside the structure, otherwise there will be encapsulation and it can’t be washed out.”

Conner Dunn, who worked on the project while a graduate student at Georgia Institute of Technology, described the method as a layering process.

A motion stage moves up and down and a projector above this rotating stage holds the resin in place, he says. “The projector on top then projects a cross-sectional image onto the resin and then photocures the polymer under the projector itself,” he says. Among the rest of the process is the motion station moving down and the rotating sweeper eventually laying another thin layer of material over a previously cured layer.

The researchers used custom-built 3D printers and they basically used a projector to project a cross-sectional image onto a liquid, Dunn says. You have a self-supporting, powder bed-type printer that comprises a pretty simple fabrication scheme, according to Dunn.

“Simple leading images to our software and the exposure duration and layer thickness are factors,” he says. “We customized things. We built the frame for the printer itself, bought separate motors [and] a motion stage projector.”

From the customization, Conner says they developed MATLAB software that processed the images and controlled the motion. “The frame is customized because with the printers we had available it wasn’t easy to print because we could not get even infill in the platform.”

The sweeping blade, resin bag, and the blade design changed over time. As the sweeper pushes new material over, it inlays the material, Dunn says. The salt leeches out within the CAD model.

“I think salt was chosen partly because it’s low cost and can be implemented in existing 3D printers right now,” Dunn says. “You don’t think salt. But it just shows you have to keep an open mind.”

For Further Discussion
You don’t think of salt but it can mix well with 3D printing to give scaffolds improvement in material porosity, Prof. Xiaoming Mu, Wilkes University