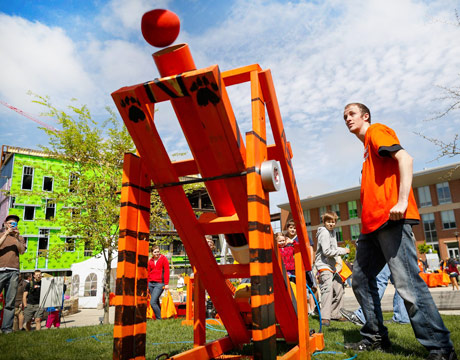 For mechanical engineer Aleef Mahmud, who several years ago demonstrated an adjustable seat he developed for a disabled sailor so that he could captain a sailboat in a competition for the first time in 31 years,the festivalhas meant moving ahead much faster in his career than he expected.

Kayla Wheeler, who graduated in May with a bachelor’s degree in biomedical engineering and plans to go to graduate school in business, may as her first full-time job head up a company licensing rights for the custom protective padding for helmets she and a team designed and showcased at Imagine RIT this past May.

The festival was started eight years ago when university President William W. Destler (who has an engineering background) wanted to start a festival to show the outside world what RIT is all about. In its first year, 2008, Imagine RIT attracted 17,000 visitors and the numbers have climbed every year. Since its start, more than 200,000 have attended the day-long event that celebrates the intersection of technology and creativity. On May 2 of this year, Imagine RIT showcased more than 400 interactive exhibits in the fields of engineering, science, technology, music, and art.

Mahmud’s and Wheeler’s stories are not uncommon. Mahmud learned of the need for the seat as he was looking for a senior project. He became part of a team of mechanical engineering majors aiming to develop a seat that was lighter and more maneuverable than anything available. The system they came up with consisted of a chair that rolled on a semi-circle track mounted on the deck of the boat and included adjustable handgrips and crank-steering mechanisms.

Mahmud said he had no idea how much of a sense of freedom this gave to those who needed it until he saw it in action, and that project has led to other related work since he graduated with B.S. and M.E. degreesin mechanical engineering in 2012.

Working as an independent product development engineer, he has been hired as a consultant by other sailing groups that want to build such a device. “Last winter I worked with a boating nonprofit for the oldest boating co-op in the U.S.,” he says. “They asked me to build a new iteration of the adaptive system for their community of disabled members.”

“When I exhibited at Imagine RIT, it felt so good to talk about this is what I have been doing,” he says.The experience taught him much more about other valuable qualities he would need, too. “It helps you learn soft skills, such as presentation, as well as the importance of understanding consumer insights,” he adds. “You are speaking to spectators, and they are prospective customers.”

He believes the real world experience from Imagine RIT has given him a head start in the working world. “Things are a bit accelerated,” he says. “My dual degree program was very aggressive, hands-on learning as well as theory. Makes you a workaholic, but I’m further along in my career.”

Wheeler’s project got its start the summer after her sophomore year when she joined other students in an incubator programaimed atdesigning headgear for athletes to offer better protection against concussions. “I have always been interested in entrepreneurship, but I never had an idea that I was passionate about pursuing,” Wheeler says. “Because my major was biomedical engineering, it was right up my alley.”

The result of the team’s work is a new, custom protective padding for helmets. First, the team developed a method to scan the wearer’s head with a special machine. Then software was used to map and configure the padding. The final product was created using a basic 3D printer that the team modified to print a foam-like material. From start to finish, the process takes just a few hours, and the padding fits inside off-the-shelf helmets. At the Imagine RIT festival, the team tested the padding with a drop test against other helmets using a test device that they also developed.

Wheeler and a colleague, Patrick Streeter, who earned his B.S. in mechanical engineering from RIT in 2013 and M.S. in sports engineering from Sheffield (England) Hallam University in 2014, formed Volatile Padding Technologies to continue the work. He serves as CEO and she as president. For now, that work is part-time (he works in the sports research lab at New Balance, and she plans to continue her education at RIT to earn an MBA). Their hope is that the project will be far enough along by the time she graduates to make it a full-time job. Their immediate goal is to license or sell the rights to their patent-pending technology because of the costs of manufacturing the padding themselves. “We’re trying to get it going soon,” Wheeler says.

For Further Discussion
When I exhibited at Imagine RIT, it felt so good to talk about this is what I have been doing.Aleef Mahmud, Independent Product Development Engineer