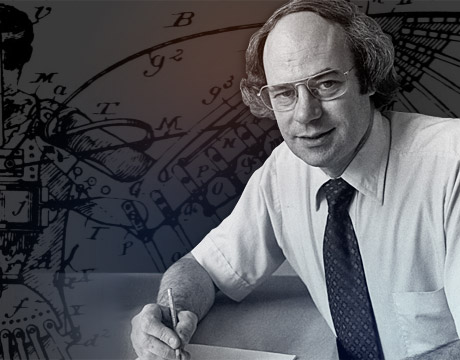 If John Lienhard, of Engines of Our Ingenuity fame, had not lived his life following the advice of the early Roman poet Horace to “Carpe diem” (“Seize the day”), he likely would not have been able to have a career that has combined his love of engineering, teaching, and cultural history.

His personal story of struggle to earn a Ph.D. in engineering and of broadening horizons much further is an inspirational one although not a master plan. Commenting on his career track, he noted, “Is anyone’s path built in from the outset, or is it formed by a succession of circumstances? Perhaps the person in question is least qualified of anyone to say.”

His early school years did not portend well. “I couldn’t read and write, could barely scrape through school,” he said. Finally, his world “opened up,” when he began a drafting course as a high school senior. “I just loved it and realized here is something I can do,” he said. “I didn’t think I was stupid, but I recognized that there was a hurdle to overcome.”

The hurdle was dyslexia, which was identified in the late 19th century, but which was not on educators’ radar when Lienhard was struggling. “There was no diagnosis back then except for lazy and stupid,” he said.

But overcome it he did, mostly on his own, and then went on not only to train future engineers but also to incorporate his love of teaching and cultural history reaching the general public via radio with stories of how culture formed by technology and other creative enterprises in turn shapes technology and science.

It was the drafting course that gave him some confidence, but he still struggled at community college as a C or D student in pre-engineering until he figured out how to make As. He repeated the same pattern before earning a B.S. in mechanical engineering at Oregon State College and took a job in the drafting department at Boeing. But drafting was mind-numbing for him. After some aptitude tests, he transferred to Boeing’s education department training new hires in skills such as drafting and design practices, and he loved it. But then he knew that meant he would need a higher degree to continue in education, and he enrolled to earn a master’s in mechanical engineering at the University of Washington, only to be drafted by the Army upon graduation.

In the Army, he found himself spending a lot of time just standing in lines. Again, “carpe diem” came into play. He tucked a paperback book in the breast pocket of his fatigue jacket. “When I was standing in line, I would practice eye tracking,” he said. That was his solution to improve his reading with his dyslexia.

Discharged from the Army, he returned to the University of Washington as a teaching instructor and. Knowing he should have a Ph.D. for a career in academia, enrolled in the engineering program at the University of California at Berkeley. “Same old story,” he says, “I started out as a C student and ended up with As.”

After graduation he returned to his first love – teaching – first at Washington State and subsequently as a full professor at the University of Kentucky, while continuing work in thermal sciences for which he was recognized as making outstanding contributions to the science of heat transfer and phase change.

Always eager to learn new things, one summer he applied and was accepted at a Smithsonian course on how to write about the history of technology. Immersed in the Smithsonian archives, he was captivated by how much art, technology, and cultural ideas are all intertwined and have shaped society. Back teaching in Kentucky, he wanted to share that insight with his engineering students so he created a course in cultural history, a program of study that went so well that he also introduced it when he joined the engineering faculty at the University of Houston in 1980.

One summer in the late 1980s in a chance conversation, the dean of engineering mentioned that he was considering creating 30-second radio spots to highlight engineering. Lienhard responded that they shouldn’t be short advertising spots. “We want to be telling stories,” he recalls saying. Three days later, he had prepared three scripts, about four minutes each. “Nobody thought it would work at that length,” he said.

But the show, Engines of Our Ingenuity, was produced by the University and its public radio station and began airing Jan. 4, 1988. It continues to this day as a five-day-a-week radio series now available on scores of public service stations across the country and other outlets overseas as well as in space (the International Space Station) and online. As of Jan. 7, 2016, 3,038 new episodes have aired and are posted on the “Engines” web site.

The essays tell the story of human invention and creativity. The stories focus on engineering and technology, but bring in math, other sciences, art, literature, medicine, and music. For more than two decades while still teaching, writing, researching, Lienhard was the author and voice of the show before others joined his team.

“At first I cherry-picked things from teaching and put them together in episode form,” said Lienhard, author or co-author of four books and more than 300 published articles. “Then I had to learn new material and spent an enormous amount of time in the library and seeking out stories wherever I could find them, establishing threads of continuity. The threads weave, mix, and blur and start bifurcating into other topics. Something emerges out of this whole business of creativity and invention, and it’s that invention is a matter of catching the fleeting idea as it whips past you, and other people miss it.”

Invention is a matter of catching the fleeting idea as it whips past you, and other people miss it.John Lienhard