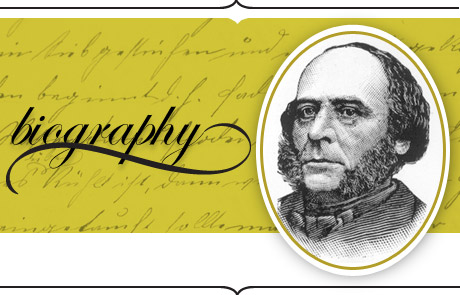 The disruptive powers of genius are often held at bay by the stubbornness of lesser, more administrative mortals. The myopic vision of others would plague visionary inventor John Ericsson (1803-1899) throughout his life.

Machinery surrounded Ericsson in his boyhood. There was little else to light up a boy's life in the dark forests of Langbanshyttan, Sweden. It was there that Ericsson's father ran an iron mine and an iron works, and both would inflame Ericsson's imagination. He spent days drawing the workings of anything that moved. When his father Olaf transplanted his family to work on a ship canal, the boy's passion for engineering led to employment making drawings for the canal company. He was 12. Within a year he had become a leveler, which meant making plans and calculations for the construction of the canal.

To pass the time when not working, he constructed wooden models. His first significant invention, according to him, was a working miniature saw-mill, made entirely of wood aside from an operating band-saw which he'd filed from a watch spring.

To heap on the responsibility, when Ericsson was 17, his father left, meaning it was up to John to support the family. He joined the Swedish army where, apparently, his muscles proved as powerful as his mind—he was said to have lifted a 600-pound cannon. He also mastered the intended use of artillery and this knowledge would serve his most famous invention many years later.

Once through with the army, he moved to England, where he hoped to develop a more efficient engine. There he tinkered first with gas engines, then with an engine with a fire directly beneath the piston. He also developed an air-compression water pump for a tin mine in Cornwall.

But when the first steamboat crossed the Atlantic in 1819, Ericsson's passions were hijacked. He turned his mind to improving the steam engine. The product of this new line of research was the first steam-powered fire engine, built in 1828. The London Fire Brigade rejected the invention as impractical, favoring their tried but largely ineffective hand-operated machinery.

The following year he entered a wildly hyped contest for the best steam-powered locomotive, with a prize of $2,500. Ericsson, now 26, had never toyed with anything train-like, but in less than two months he had constructed his Novelty. At the Rainhill Trials, the Novelty crushed the competition—in terms of speed, at least—flying down the rails at a then-unheard-of speed of 30 mph. Unfortunately, a burst pipe put the vehicle out of commission for an official win.

We can thank Ericsson's invention of steam-powered, screw-driven propulsion for our sail-free, less picturesque waterways. Faster than it put the kibosh on sail-powered ships (for things other than pleasure) his screw would put an end to his days in England. Ericsson outfitted the Francis B. Ogden with such a screw, fully submerged below the water line, and managed to hit 10 miles an hour in the Thames. But on inspecting the vessel, The Lords of the British Admiralty dismissed it as "an interesting experiment." When Ericsson's larger vessel, the Robert F. Stockton, made it to New York on screw power, the U.S. decided it could put the inventor to good use.

In the U.S., he began work for the Navy, producing several screw-propelled war ships. Princeton had all its machinery below surface level, safe from enemy fire (never mind that an accidently exploding cannon killed a secretary of state). Marmora had twin screw engines. Investors then put up half a million dollars for Ericsson, now a U.S. citizen, to build a hot-air engine to power a paddle wheel steamship, aptly named Ericsson. Within weeks of its launch a tornado sunk this "vessel toward which the eyes of the world" had turned, as the New York Times put it.

For years, Ericsson had been thinking of a ship safe, if not from tornadoes, at least from cannons. France and England had already been building massive "ironclads" but the smaller ship Ericsson had in mind had one chief difference: its bulk sat below the water line. Napoleon III had already rejected Ericsson's proposal for such a ship, but when the Civil War broke out Ericsson convinced Lincoln that the Navy needed his largely submerged ironclad (in one letter he extolled his own "practical and constructive skill shared by no engineer now living."). The press lambasted the project as a "cheese box on a raft" (the cheese box was the turret that spun above the water—first of its kind). Once made, the U.S.S. Monitor was on its way to New Orleans when the Confederate ironclad, the Merrimac, began ramming and sinking the ships of a blockade at Hampton Roads. The North feared it would soon bombard the White House. Monitor moved to meet Merrimac, and when the Confederate ship attempted to continue its second day of devastation, it was beaten back by Monitor in a four-hour duel.

Monitor proved as stubborn as Ericsson's own adversaries to innovation. In the end it made history thanks to its genius, strangeness, and usefulness—much as Ericsson would be remembered himself.

In a letter to Lincoln, Ericsson extolled his own "practical and constructive skill shared by no engineer now living."