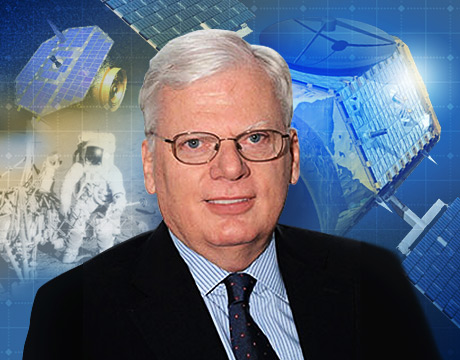 John Celli’s career as an engineer has spanned five decades and a full description of his many accomplishments in the field would require a separate full-length feature. His career has encompassed events from the 1969 Moon landing to the earliest days of telecommunications satellite technology to the recent development of 3D printed satellites. Here, the 2016 Silicon Valley Engineering Council Hall of Fame inductee describes some of his career highlights and tells readers where he thinks the field is headed next.

Q. What first made you interested in the field of aerospace in general and satellite technology specifically?

A. I was living in Rome, Italy and attending the School of Engineering in 1969. I lived at the top of an apartment building, and the apartment building was at the top of one of the Seven Hills of Rome, so I had a beautiful view of Rome; half of Rome at least. It was a hot summer. In those days there was no air conditioning, so the air conditioning, when you watch TV, if it's a hot night, it would be for you to sit on the balcony or the terrace that you have and watch the TV which is inside, which I was doing.

All of a sudden it was about 1:00 in the morning. I could hear an incredible noise coming from below me, a mix of cheers and applause and screams. It's something that I never forgot. Even to this day, I can close my eyes and live it again. What it was, was Neil Armstrong setting foot on the moon. We were all watching that great picture that was sent from the United States all over Europe. It was not actually being there and watching this incredible event, it was the reaction of the millions of people in the city watching that event. It's just something that still gives me the goosebumps, so I had no choice. I was already in engineering and at that split second, I said, "Well, I'm going to work in aerospace," and that's what I did after graduation.

That's the reason. Not only did I decide to be in aerospace, but it actually made me decide to leave Europe and move to the States, where obviously the space exploration, aerospace, and satellites in particular, were at a much higher level than in Europe in those days.

Q. What do you think the next moment like that will be? Will it be arriving on Mars someday, or will there be another event like that?

A. To be honest with you­-and I express my opinion in some conference roundtables at NASA headquarters-I don't think necessarily Mars exploration is going to do it. I don't know if you know this, but the young generation seems to be very focused doing work on things that have a social content. In other words, things that help the environment, that help people, that help the poor, that help growing countries, and they're very attracted by that. The ultimate social help that space technology can provide is, if you think about it, capturing an asteroid that is coming to the earth and threatening everybody's life. That is the ultimate social service.

Q. What are some the latest technological developments in the field of satellites that might interest ASME.org readers?

A. The satellite industry has been evolving continuously. We build these very complex and huge machines that are 30, 50, 100 times bigger than what I used to do in the mid-seventies or the eighties. You’ve certainly heard about making complex parts in a very efficient way using 3D printing. It's a form of building components using a different type of composite material, because basically they use powder and certain specialized resin to do that. We're actually flying those kind of things, and I think that technology has to evolve and will evolve and be able to do even more complicated things or [build] bigger objects that can be used for all kinds of applications, but certainly for satellite and for space.

The other thing that is pushing for new technology is the need to reduce cost for satellite systems. What I mean with satellite systems, it's not just the satellite itself, but it's the ground infrastructure needed to provide the services, as well as the launch vehicle. It needs to be used to take the satellite all the way up to low orbit or geostationary orbit.

Another area that I think for mechanical engineers would be particularly important in the next few years, is the packaging. If you think of the capability in an iPhone, in a very small environment it is very strong, it is moisture resistant, it is heat resistant, and always works, always performs, but it's very small with a lot of capabilities. That's packaging, right? Potentially there's going to be a breakthrough in the next few years. It's something that is needed, that needs to be pushed, and will certainly help in reducing the size of the satellite, the cost, and therefore the cost of launching it.

Q. Where are things going in the future in this field?

A. In the future it is going to be more and more important to have satellites that are flexible. Let's say you order a satellite today, a big one. You probably won't get it for another three years. Then you launch it and it has to provide services for at least 15, 16 years in order to provide you with enough revenues to cover the investment, which is substantial, and provide a return, so it's a long time.

It's very difficult for current customers and future customers of ours to predict what the market is going to be in certain region of the world, so you need something that is flexible. For example, if today it's covering South America and for some reason there is a reduced demand, that you can move that capability into another area, for example, North America or Africa, the Western coast of Africa, and provide services there.

It’s going to require manufacturing techniques that are different, that we may not have today. That's an area that I think progress has been made over the years, but I don't believe enough. That's an area where mechanical engineering should push where we are. It's, as I said, a combination of packaging, extracting the heat from various small and complex packages containing digital equipment, for example, and reducing the mass and the cost.

Robotics is going to help as well. We have programs that we want to get from NASA for assembling a satellite in orbit. The advantage of that is that you can send a satellite up and then you can send another one, park it next to it with robotic capability, and change that satellite’s antennas and payload.

Q. What did it mean to you to be a Silicon Valley Engineering Council Hall of Fame inductee?

A. It was obviously a great honor, particularly for an immigrant. I came here 35 years ago, and in Silicon Valley, to be able to rise to the top of a company that I joined 35 years ago as just a young engineer, and then being inducted in the Hall of Fame, it's just unbelievable. As I said in my speech at the conference, I was also surprised because in this industry, the satellite industry, individuals can seldom accomplish a lot. You need a team. It's always teamwork. The complexity and the challenges of designing and building satellites are so huge that you need a team to be able to resolve problems and be successful.

For Further Discussion
Even to this day, I can close my eyes and live it again: Neil Armstrong setting foot on the moon. We were all watching that great picture that was sent from the United States all over Europe.John Celli, president, SSL