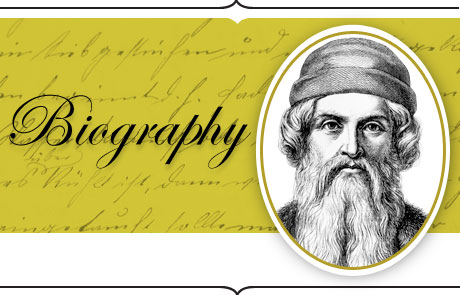 The significance of Johannes Gutenberg's (Circa 1398 – 1468) contributions to printing and their impact on greatly expanding opportunities for literacy and learning, particularly among lay people, cannot be overstated. In fact, some assert that no invention in the history of man has had a greater influence on society than the introduction of printing in the 15th century. Contemporary commentators say his work led to an "information revolution" that can be likened to what has happened with the development of the Internet today.

Universally recognized and credited with inventing the printing press, Gutenberg actually aggregated a number of inventions and processes to make mass-production of printed books economical for both printers and readers. Other individuals in other countries were known to have been developing a printing press, but key to Gutenberg's work was not only the development of a process for mass-producing movable type but also the use of good quality oil-based inks. Unlike standard water-based inks, the new oil-based inks could easily transfer from metal to paper. Those were melded with the adaptation of a wooden oil or wine screw-type press for printing.

Prior to the use of movable type, books in Europe were typically handwritten manuscripts while paper money, playing cards, posters, and the like were block-printed from hand-carved wooden blocks, inked, and transferred to paper. Gutenberg's movable type involved metal letters at the end of a metal shaft that could be produced in quantity, arranged, and moved around so that mistakes could be corrected easily, and the type could economically be reused forthe next project. Both of the earlier methods of reproduction were expensive and time-consuming. The combination of movable type, oil-based inks, and a workable press revolutionized European bookmaking and spread rapidly across the continent and later the world.

Little is known about Gutenberg's early life, even the exact year of his birth, or his adult personal life. Biographers do not agree on the nature of his early training: Some say he began focusing on mechanical arts at a very young age while others say he was trained as a stonecutter and goldsmith. What is known is that he was born just before the turn of the 15th century in Mainz, Germany, and moved to Strasbourg in the early 1430s, where he made a living as an inventor, coming up with a new technique for polishing gemstones, making mirrors for pilgrims visiting holy sites and other projects that he kept under wraps, which could have been experiments leading to his printing process.

He remained in Strasbourg for about a decade before returning to Mainz. There is little information for about a decade but it is believed this is the period when he began experimenting with printing single sheets of paper and small books before beginning work on his famous Bible around 1450. The skills he developed during his time in Strasbourg and his work with metals undoubtedly were valuable in developing a metal type suitable for printing, believed to be an alloy of lead, tin, and other metals that would melt at low temperature, cast well, and yet be durable when in a press.

His major work, the Gutenberg Bible, was completed by 1455 and sold at the Frankfurt Book Fair that year. The process to produce them had to have been extended and labor-intensive because some 300 different pieces of type are used to print the Bible. These first copies that were immediately recognized for their high aesthetic and technical qualities were expensive, costing several years' salaries for the average working man. However, the effect of the process was to allow mass production and cut the costs of books, making information readily available and easily accessible to a broad segment of the population.

In the beginning, most books focused on religious topics. As book printing spread to incorporate a range of topics, the impact of Gutenberg's work was recognized as instrumental in laying the groundwork for a modern knowledge-based economy and participation by the masses. Gutenberg himself did not reap great benefits. In fact, a legal document dated 1455 indicates that a wealthy business partner sued him for the return of monies loaned. This money was likely used in developing his process and printing the Bible. He lost the suit and is believed to have had to turn over some of his printing equipment. Not much else is known about the rest of his life except that he was given a pension by the Archbishop of Mainz and lived in his hometown until his death in 1468.

In fact, some assert that no invention in the history of man has had a greater influence on society than the introduction of printing in the 15th century.