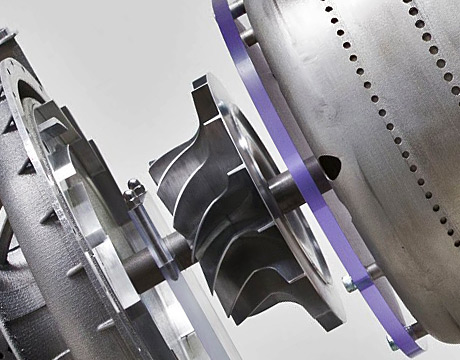 A jet engine fit to power a plane is not a piece of technology you stamp out by the thousands, like so many trinkets headed to the gumball machine. To get the kind of precision and reliability you want under the wings of today’s flying machine, you’ll need about two years of manufacturing time, never mind the half a decade or so of designing and research that proceeds it.

But now Xinhua Wu, a professor of materials engineering and the director of Monash University’s Centre for Additive Manufacturing in Melbourne, Australia, has proved to the world that a jet engine can be made on a 3D printer.

Wu had already printed a variety of components for a variety of aerospace companies, and, in her view, “It’s not much more difficult to make the whole engine, once you know how to deal with the materials.” To do just that she applied for a grant from the Australian government.

Wu had previously made 3D printed parts for GE, Boeing, and other companies, and she had learned that such cutting-edge products were not ones she could use to flaunt the capabilities of new additive technology. So, with those funds, she set out to rebuild a 40-year-old engine. Provided by Microturbo, it’s one that can still be found on the Dassault Falcon 20. “The older design I can display to the world,” says Wu. “If it’s a new design there is confidentiality, and we can’t show anyone.”

To print the engine, Wu and her team went through piles of 2D drawings and scanned the engine’s parts (several of which were not represented in the drawings). They also determined the material of each component to reproduce it with precision. They worked to optimize the printing process to be as fast as possible, and to use as little supporting material as possible. One particular challenge were the 100-micron holes—not a trivial size in the world of 3D printing.

After a year of work, they printed two complete engines. Now, should anyone want another, they can print it in a matter of months—years less than it would have taken to build in the past.

In theory, the engine is ready to be fired up and even power a plane. “There is nothing stopping anyone from doing it,” says Wu. “The only thing is we signed an agreement beforehand. We’re not allowed to do that.” Nor are they allowed to run off a few spare parts. The same agreement dictates that Wu and her team cut the weight of certain components before firing it up. “A direct duplication of the current engine is straightforward,” she says. “But we are going to change the design, and that becomes challenging. That will be the next step.”

But that’s not the only next step. Already, several engine manufacturers have approached Wu about building a newer engine. Duplicating the materials used in the older engine was a self-imposed constraint unique for the project. But those materials were better suited to casting and forging. Now Boeing has asked Wu to design a material and process more appropriate for 3D printing. And machining companies have come to her hoping she’ll pass down her knowledge.

However, much of Wu’s work is likely to change how things might be printed in the future. “The first goal,” she says, “is to demonstrate the abilities of 3D printing.”

For Further Discussion
A direct duplication of the current engine is straight forward. But we are going to change the design, and that becomes challenging.Prof. Xinhua Yu, Monash University