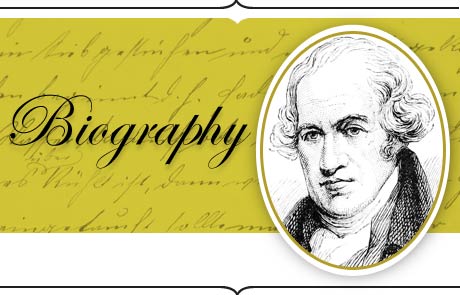 The boy James Watt (1736 – 1819), future inventor of the steam engine, sits in the kitchen, his eyes and mind transfixed by the boiling kettle on the hearth. Not easy for history to ditch such images, but it probably has as much relation to truth as the one of George Washington hacking at the cherry tree.

The tale comes from his cousin Marion Muirhead, recalling the young inventor many years later. Watt would turn his attention to steam, of course, and even use a kettle in his experiments, but not before he had paid a few dues as instrument maker and repairman. He seemed somewhat slated for the role, as his father sold mathematical and navigational instruments and his grandfather was a mathematician.

Young Watt spent a year as an apprentice in Glasgow, mucking about with fishing tackle. Then he found another apprenticeship in London, where, in the services of John Morgan, he got his hands dirty with scientific equipment. 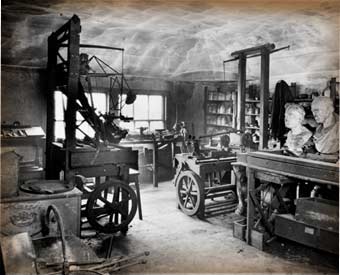 James Watt workshop. Image: Science Museum/Science & Society Picture Library
The training primed him for a job back in Glasgow. When the university needed someone to fix a mass of astronomical instruments that had salted up on their way from Jamaica, they brought Watt on as "Mathematical Instrument Maker to the University." Practically, it meant he was a handyman for the University's elite. For Professor Joseph black, obsessed with the transference of heat, he made a condensing syringe and a steam digester. For natural philosopher John Anderson he made pulleys, pumps, and air guns.

Meanwhile, Watt began creating his own businesses serving Glasgow's industry. Soon he had a staff helping him repair and build all kinds of equipment, including scales, Hadley's quadrants, compasses and musical instruments. The later were to be produced by his staff, but were not to be played. In fact, he hired one John Southern on the condition that he would give up music.

Surrounded as he was by men of science, some of their penchant for investigation and forward dreaming would rub off on the instrument maker. At the urging of chemistry professor John Robinson, who had a head full of steam-powered carriages, he began his own exploration of steam.

At the time the only steam engines put to any industrial use were the Newcomen engines used to pump water out of mines. The mechanics of these primitive machines were simple: steam filled up a cylinder, and then cold water was injected into it to make the steam condense. This created a vacuum and pulled the piston back down. It was the draw of the vacuum that really powered the engine—they weren't so much steam engines as condenser engines.

Watt was a man who couldn't stand waste. Even more irritating to him than the hours an employee might throw away sawing on a fiddle was the heat extinguished—and the coal wasted—when the steam of a Newcomen engine was doused with water. So Watt used, finally, that kettle, with a glass tube to pipe steam into other vessels to begin his study of the qualities and behavior of steam. Eventually he developed an engine with a cylinder surrounded by wood, with steam in-between—the steam jacket. The condensing of the steam would happen elsewhere, in his "separate condenser." Now it was the entering steam that powered the piston—and it could be argued, the steam engine was born.

Watt received his patent for the engine in 1769, but afraid that it was not ready to be put to work he turned to other pursuits for his livelihood. He spent some years building canals, and 15 years trying to extract alkali from seawater.

It was a forward-thinking buckle maker, Matthew Boulton, who would supply the funds and the intellectual fuel to get Watt back at steam. The only problem was that the patent for his engine was about to run out. Boulton and other well-connected friends used every ounce of political power to extend the patent.

In 1776 a Watt engine made its first appearance and soon they were populating the mines of Cornwall. More interested in R&D than constructing engines, Boulton and Watt charged their clients royalties based on the amount of coal they saved by not using a Newcomen engine.

In the ensuing years Watt would improve his engine with several key developments. Making one that could push and pull was one big step. Putting two together with a crank to make rotary power was another. The idea for the crank however, was, stolen, in all likelihood, by an employee, and patented before Watt could get to it. Rather than pay to use an idea he felt he should have rightly owned, Watt came up with a variety of alternative methods for converting up-and-down power to rotary. His "sun and planet" gears proved the most effective. Now Boulton and Watt were prepared to open up their market to industries beyond mining.

Having been stung by crank theft and other patent infringements, the pair spent a great deal of their time in the next decades litigating and sending spies to investigate the engines of mines everywhere. Afraid of using high-pressure steam—soon to be the new wave of steam power—Watt declared, in 1785, that he would leave the advancement of technology to "younger men, who have neither money nor character to lose."

Having money to lose himself, though, he did not quite leave his youngers alone. He used all his political pull to sink the patents of those with superior engines. And he scoffed at those who wanted to put a steam engine on ships as well as those who thought to put it on a locomotive. While these advancements were being pursued he spent his time studying the medical benefits of various gases, extolling the "powerful anti spasmodic" powers of carbon monoxide. With Boulton he even developed a bellows with a mouthpiece to deliver such tonics.

Though undoubtedly Watt's engine hurried along the industrial revolution, it was eventually replaced with more advanced engines. And though the kettle still has its place in every home, steam power is somewhat on the wane. Watt's chief contribution to our world may be his name, which replaced his own term for energy, good old horsepower.

Even more irritating to him than the hours an employee might throw away sawing on a fiddle was the heat extinguished—and the coal wasted—when the steam of a Newcomen Engine was doused with water.