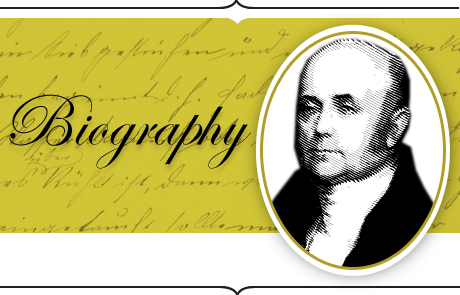 Born in 1766 in Newburyport, MA, Jacob Perkins attended school there until he was 12. He was then apprenticed to a local goldsmith and produced gold beads. Later he invented a method of plating shoe buckles. With very little formal schooling, Perkins demonstrated an inexhaustible curiosity and remarkable ability to understand mechanical design and manufacturing throughout his life.

His reputation as designer and inventor was well known by the time he was 21, when he was hired by the Massachusetts mint to manufacture a dye for manufacturing copper coins. In 1790 he invented a system for cutting and heading nails that greatly simplified the manufacturing process. He received a patent for his device and established a nail-manufacturing facility in Amesbury, MA, but a lawsuit by investors forced him to shut down the business.

Undeterred by this setback, Perkins went on to invent steel (rather than copper) plates for bank-note engraving—a technology welcomed by banks because it made counterfeiting money nearly impossible. After disappointing fundraising efforts in Boston, New York, and Philadelphia, Perkins and his partner, Gideon Fairman, sailed to England in 1818 to find investors more willing to fund their engraving technology. They were well received in London and established a highly successful business that manufactured plates and printed notes for local banks. In 1840, they received a contract to produce England's first penny postage stamps; the plant printed millions of stamps over the next 40 years.

Perkins had always been fascinated with water compression and developed an experimental high-pressure steam engine that could function at pressures as high as 2,000 psi. Even though it was an impressive accomplishment, the steam engine was never commercialized because it could not be practically integrated into the manufacturing technology that existed at the time.

A short time later Perkins invented his famous "steam gun" that relied on highly pressurized steam instead of gunpowder to fire bullets. It was so powerful the balls penetrated 11 planks, each one inch thick. With a pressure of only 65 atmospheres, the gun's bullets could penetrate an iron plate a quarter of an inch in thickness. Perkins then attached a tube to the gun barrel that dropped balls into the barrel in rapid succession, creating a machine gun that could fire nearly 1,000 rounds per minute. He even invented an attachment that allowed the weapon to shoot around corners.

According to the editors of The London Mechanics' Register in November 1824:

"What plague, what pestilence would exceed, in its effects, those of the steam gun? Five hundred balls fired every minute with one out of 20 to reach its mark? Why, 10 such guns would destroy 150,000 daily. If we did not feel that this mode of warfare would end in producing peace, we should be far from recommending it." Despite its impressive deadly firepower, the British military decided against commissioning the weapon because it was unwieldy in the field and would have been difficult to maneuver quickly.

Further experiments by Perkins proved the compressibility of water, which he measured with a piezometer he designed. Other inventions included a pleometer for measuring the speed of a ship moving through water and a bathometer, which measured water depth. Later in his career, after discovering liquefied ammonia had a cooling effect, he wrote a groundbreaking description of the vapor compression cycle for refrigeration and ice-making.

To share inventions with the public, Perkins established the National Gallery of Practical Science in London in 1832. One of the most popular exhibits was his steam gun. Perkins died in London in 1849 at the age of 84 and is buried in Kensal Green Cemetery.

Perkins had always been fascinated with water compression and developed an experimental high-pressure steam engine that could function at pressures as high as 2000 psi.