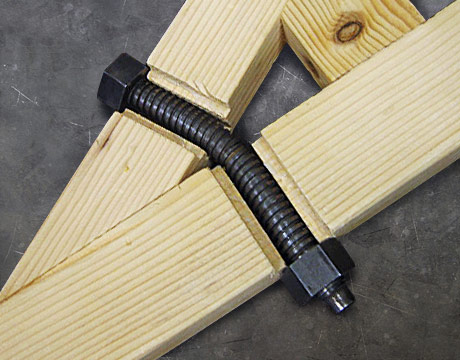 It Fastens and Flexes

In the world of nuts and bolts and other mechanical fasteners, things are usually flat, parallel, perpendicular, and rigid, just the way engineers like it. But a professor at California Polytechnic State University, San Luis Obispo has disrupted that notion.

Saeed Niku, a professor of mechanical engineering at Cal Poly working with students in one of his classes, has developed the “Flexible Fastener,” a bolt designed to bend.

At the heart of the fastener is a shank made of a strong, yet flexible material such as Kevlar, nylon, steel cable, or wire rope. Threads made of steel coiled like a spring wrap around the core and are bonded to it along the length and at each end, along with a head at one end.

The fastener is “axially rigid but laterally compliant,” Niku said. “You can tighten the screw like any screw, but it can also move sideways.” It can carry axial loads yet is flexible enough to connect non-parallel surfaces, go through mismatched or misaligned holes, or handle machine applications where small lateral movements are required.

The idea for the Flexible Fastener came from a project in Niku’s Philosophy of Design class in 2000. Three students were working on a project where there was a question about putting screws into the wooden frame of California houses for earthquake protection. They wanted to bolt the houses to the foundation. Niku came up with the idea for a flexible bolt, and the students took it and made samples.

After the class ended, Niku took over the project and refined the design. The National Collegiate Innovators and Inventors Alliance and the Lemelson Foundation initially funded the effort.

The Flexible Fastener can be made in many different sizes, from as small as 3/16 inch in diameter to as large as desired. According to Jim Dunning, program manager in Cal Poly’s Office of Research and Economic Development, which engages industry through the California Central Coast Research Partnership, the fastener can be manufactured to various degrees of rigidity.

Niku said the fastener can be used with “anything basically that is not parallel or aligned or needs to move sideways.” In construction, it can attach parts with non-parallel surfaces without a need for countersinks, as in a truss. It can be used in repairing and refurbishing products and structures where holes do not line up or are misplaced. You can actually just bend a screw into the non-parallel surfaces and attach them.

It can also be used in robotics applications where simultaneous lateral compliance and axial stiffness is desired, as in attaching a fixture to the robot that can move sideways for assembly. Similarly, the fastener can be used in medical applications such as in artificial knees, where bending is desired between different parts while they remain attached or where you need to move sideways because the holes don’t match. And Dunning adds, “An application I always have in mind is a seismic retrofit project.” The bolt’s lateral flexibility allows whole structures to flex to better withstand the jolt of an earthquake.

Niku received a patent on the Flexible Fastener in 2005, and now the Research Partnership, known as C3RP, is attempting to license it. “We seek a partner willing to invest the time and tooling to find out exactly what the optimum manufacturing would be,” Dunning said.

[It can be used with] anything basically that is not parallel or aligned or needs to move sideways. Prof. Saeed Niku, Cal Poly, San Luis Obispo