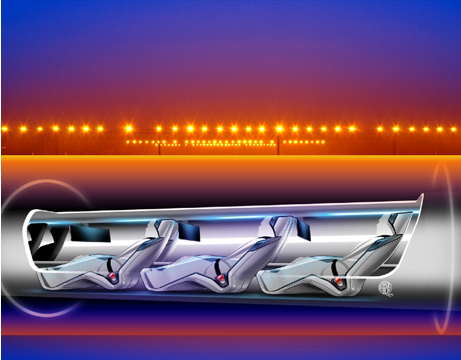 Transportation systems, or at least the speed with which they deliver people and freight to their destinations, have remained technologically stagnant in the U.S. since the demise of the supersonic Concorde airplane. High-speed rail is now common in Europe, China, and Japan, and magnetic-levitation, while costly, has proven itself in China. In the U.S., Amtrak’s high-speed Acela is stuck at regular because of track limitations while California’s at least-$70-billion Los Angeles-to-San Francisco plan is moving fitfully. Other proposals remain stalled as skeptical government officials worry over high capital costs.

In an attempt to greatly shake things up, in August Elon Musk unveiled a concept called Hyperloop that would send up to 28 people sitting in pods hurtling through elevated vacuum tubes at speeds reaching 800 miles per hour, great enough to reduce the travel time between Los Angeles and San Francisco to 30 minutes. He claims the first phase of the Los Angeles-San Francisco route could be built for $6 billion, and envisions Hyperloop taking advantage of existing rights-of-way by being built in the median of highways or Interstates. Although the scheme was greeted with much skepticism, Musk’s track record of success with SpaceX, Tesla, and Paypal gives the concept credibility. And by opening up the project for review and actively seeking input on its feasibility, he’s hoping the idea won’t be dropped like last week’s news.

The Transportation Research Board, one of six divisions of the National Research Council that is the principal operating division of the National Academy of Sciences, won’t look at it at least until its annual meeting in January, if committee members want to put it on the agenda, says Caroline J. Rodier, the associate director of the Urban Land Use and Transportation Center at the University of California, Davis. She chairs TRB’s committee on emerging and innovative public transport and technologies. “It’s just too new,” she says, although some committee members appear interested.

As envisioned, Hyperloop would be an elevated, reduced-pressure tube through which pressurized capsules powered by numerous linear electric motors would travel. Friction and drag would be reduced by using air bearings on the tube’s inner surface. Musk calls it a combination of a Concorde, rail gun, and air hockey table.

Perhaps the most limiting problem with the scheme is the potential for drag and friction at high speed, resulting in choked flow throughout the tube, an event that would stop a pod in its tracks. Musk’s proposal potentially overcomes this with a new idea for reducing pressure within the tube. It would install an air compressor in front of the capsule that would pump air that does not flow around the capsule to a bypass nozzle in the back. This reduces the amount of air that must flow around the sides of the capsule and allow the system to reach very high speeds.

The amount of power needed to run the system is not projected to be foreboding. For instance, the stator of one linear electric motor needed to accelerate a capsule to 760 mph would be 2.5 miles long and weigh over 3,000 tons. Although each linear induction motor—Musk envisions one being placed about every 70 miles of the route--could use up to 65 MW of power during periods of peak operation, according to Musk’s calculations, the entire system would use an average of just 21 MW drawn from a solar array covering the upper surface of the two Hyperloop tubes. The motor’s rotor would be the only part attached to a pod and ride between the magnetic elements of a stator. Further, the motors can function in reverse by drawing electrical power from the capsule’s kinetic energy to slow speed.

The capsules are to ride on air bearings, each fitted with a set of 28 cushion air skis about 4.9 feet long. This avoids magnetic levitation, which is very expensive and more difficult to control, according to the estimates.

Capsules and motors would cost at most several hundred million dollars and the tube several billion dollars, Musk estimates. His plan on mounting the tubes on pylons built in existing rights-of-way helps to reduce costs, he claims. Critics have pointed out that building in the median of a highway presents its own logistical construction problems, while maintenance could cause road closures. Hyperloop is still pricey and problematic, but Musk believes it is will not be nearly as expensive as the existing high-speed California project.

Ansys’s analysis shows pod design should be altered from a tapered design to a more cylindrical one, according to reports. It suggests that a larger compressor fitted to the front of the pod would allow more even distribution of air pressure across the outside of it. It also recommends air bearings be placed on the top of the pods along with the proposed location on the bottom to help the pods stay balanced during changes in air pressure.

By anyone’s account, Hyperloop will not become reality anytime soon but the concept has started engineers thinking of how the design might be improved. Ansys officials say they will continue tweaking the design and eventually submit input. If others do the same, Musk will have at least succeeded in refocusing the concept of high-speed transportation.

For Further Discussion
As envisioned, Hyperloop would be an elevated, reduced-pressure tube through which pressurized capsules powered by numerous linear electric motors would travel.